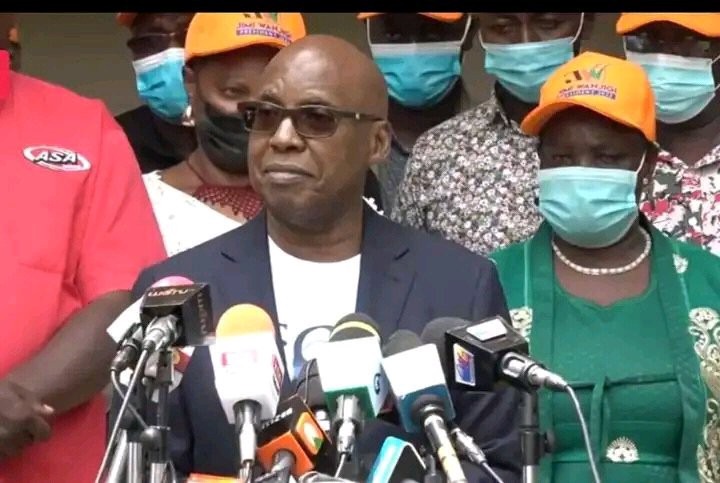 Tycoon Jimi Wanjigi has alleged that the Secretary General of the Orange Democratic Movement (ODM), Edwin Sifuna, instructed goons to pursue him out of the National Delegates Convention (NDC) on Saturday at Kasarani Gymnasium.

According to Wanjigi, he and his crew entered the venue amicably, but things quickly deteriorated when the businessman attempted to enter the VIP dais.

Wanjigi went on to say that while he forgave Sifuna for his acts, he was angry and disappointed with ODM party leader Raila Odinga.

“All I asked was a fair chance in this party to compete for the Presidency in a party I have loved so much. Their response was kicks and blows as evidenced today,” stated Wanjigi.

“Raila Odinga, thank you very much for the kicks and blows, we have known each other for many years and this is the way you thank me. You are not the democrat you claim to be,” he continued.

After being denied access, the Presidential candidate was forced to seek refuge in Kasarani Stadium Police Station after being attacked by a mob of ODM fans and delegates.

When asked why they drove him away so forcefully, Sifuna disclosed that Wanjigi was not welcomed to the event and that he is not even a delegate of the party.

Wanjigi, on the other hand, contradicted Sifuna’s assertion, claiming to be a registered member. “I an ODM member 06596 want to warn my fellow party members. What you have witnessed today happened at the top echelons of the party. Something similar might happen to you.”

Wanjigi was knocked out of the party’s presidential race after Odinga was endorsed as the party’s principal flagbearer, a double blow.

In June 2021, Wanjigi proclaimed his candidacy for president, and by the end of the year, he had begun holding political campaign rallies.

Wanjigi has spoken about ‘forces’ within the Orange party that are hostile to his aspiration from the start, while arguing that the ODM owes him its support after his years as a strong member of the party.

As a recognized associate of both President Uhuru Kenyatta and Odinga, the business tycoon has been a ‘kingmaker’ in Kenya’s previous elections.

Kenyan who moved to US 9 months ago dies in grisly road accident in Cartersville, GA