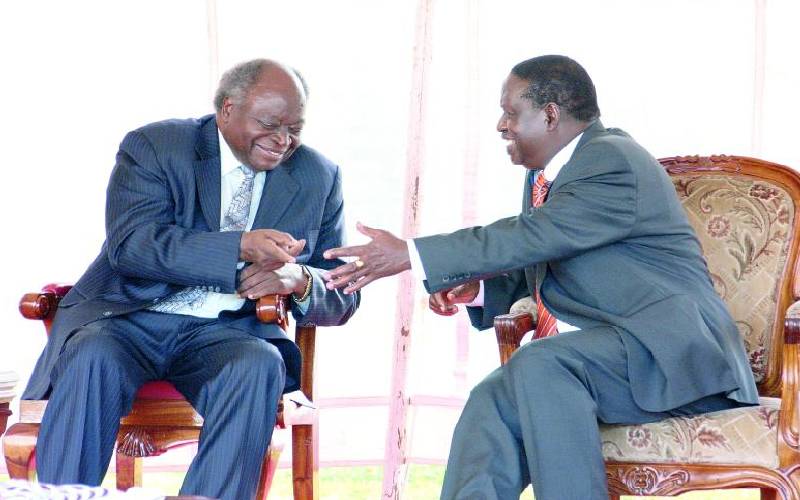 In his newest overture, Raila yesterday rekindled the rich history binding his family and the Luo community to Central residents and the country’s three presidents.

He took time to narrate his father’s association with Jomo Kenyatta, Mwai Kibaki and Uhuru Kenyatta in a 58-year-old affair characterised with love, hate and betrayal iced with a mountain of political debt.

In his pitch, broadcast by Kameme TV, Raila said Mt Kenya region owes him a political debt, recalling how he stood with Kibaki in the poll that ended Kanu’s rule even after he (Kibaki) was involved in a serious road accident.

His father, Jaramogi Oginga Odinga had also forfeited the chance to form the first African government demanding that Jomo Kenyatta be released first as a condition for Kenya’s freedom.

The former premier claimed betrayal by Kibaki men who trashed their pre-election Memorandum of Understanding (MoU) that had provided for the creation of a powerful prime minister’s slot, which he was to occupy.

His remarks are likely to trigger a fresh debate on politics of debt at a time Deputy President William Ruto was also hoping for the region’s support for backing Uhuru in 2013 and 2017 polls.

There has been talk that Ruto, too, was owed a debt by the region for supporting Uhuru and ensuring that Rift Valley voted solidly for the president in the last two polls.

Raila recalled how when on a victory tour with then newly elected President Kibaki, he was hailed by residents as mutongoria njamba (brave leader) in stopovers on the way to Nyeri.

“Problem started when those who served under Kibaki reneged on the MoU. We had an MoU to change the Constitution, but they reneged on it. I was the one who was betrayed, not any other person,” said Raila.

He went on: “They are the ones with my debt; I don’t have anyone’s debt. We went to Bomas of Kenya, I was betrayed a second time because they said no to the proposed constitutional changes. It is me they owe, but what we are doing now is to make sure we forget the past and unite the country.”

He said when he declared Kibaki Tosha, Kanu leaders said Luos would not vote for a Kikuyu because of what the community did to Tom Mboya and Jaramogi.

He also disclosed his father treated Kibaki as a son, saying how the first vice-president took Kibaki from Makerere University and made him an executive officer of Kanu and even paid his salary for two years.

“I went and told Luos that there has never been a fight between Luos and Kikuyus. What was there was ideological differences. Luos voted Kibaki 98.5 per cent. Even Orengo (Senator James) was a candidate, but Kibaki beat him in the election,” he said.

He sought to end the political hatred between the two communities by explaining how his father and the first president only had ideological differences.

He said how he has worked with the region’s political leaders in the fight for second liberation and multiparty democracy.

“My father refused to be made the prime minister and instead pushed to have Jomo Kenyatta released from prison. They worked together only to differ over land issues. That was ideological differences and not a tribal war. I supported Kibaki by saying Kibaki Tosha and worked with regional leaders like Charles Rubia, Kenneth Matiba and Bildad Kaggia for liberation. The region should remain steadfast and support our quest for a better Kenya, join us in building the bridges,” he said.

Kang’ata said agreements entered in a boardroom cannot be used to rally a community to back an individual’s presidential quest.

He said only agreements publicised by engaging the voters can be honoured.

“He needs to examine if indeed those instances fit criterion for binding political agreements… For a political agreement to hold, political offer and acceptance need to be politicised by way of public disclosure and endorsement of its terms,” said the Murang’a senator.

Wambugu said the region will not vote for anybody on the basis of political debt, but on what they seek to offer to the region.

He said those claiming political debt benefited in the arrangements they entered by holding certain positions and cannot thus turn around and claim being owed.

“I don’t subscribe to debt politics. We cannot have debt politics about Ruto or Raila. We are not going to vote for anybody based on debt, but what deal they seek to offer us for future engagement,” said Wambugu.

The MP said if people were to start honouring previous pacts, even Amani National Congress (ANC) leader Musalia Mudavadi will come and say that he lost his seat for supporting Uhuru in 2002.

“We can’t discuss debt politics because politics is about the future,” he added.

But Uhuru’s close ally and Jubilee Vice Chairperson David Murathe last year suggested that it was time to reward Raila for his struggle to liberate the country.

His remarks suggested there is a push to have the region, which has traditionally opposed Raila, to back him in the next poll.

Raila used the interview to appeal to the region to back the proposed constitutional changes by looking at the benefits they stand to gain if it is passed at the referendum.

He said the region should delink his name from the project birthed by the March 9, 2018, handshake.

“Opportunities have wings if they are not taken they fly away. I appeal to the region to remove Raila in BBI and see the gains it seeks to introduce in that region,” he said.

Raila said he was concentrating in popularising the BBI agenda and not his quest to seek the presidency, noting it will be the best legacy that will devolve more monies to the counties.

He denied claims that BBI was his secret card to succeed President Kenyatta, noting since the inception of the handshake, he has always avoided the campaign talk to give the Jubilee government time to deliver its promises to the electorate.

While defending his handshake with Uhuru, Raila said the deal had brought stability and reconciliation and should not be associated with Jubilee’s failures.

The DP has blamed the government’s inability to implement its Big Four agenda on the handshake.

“Those claiming that the handshake stopped Jubilee government from performing its mandate are dreaming. The country was in chaos following the aftermath of 2017 General Election. The country experienced tension and economic sabotage when our supporters resisted some products from some companies, but things resumed when we greeted each other,” he added.

On Ruto’s failing relationship with the president, Raila exonerated himself saying the matter was an internal problem of Jubilee’s and none of his business.

Raila at the same time took a swipe at Ruto over his hustler narrative, calling on him to sell his manifesto to the electorate without clustering people as the haves and have nots, a narrative he warned could be a recipe for anarchy.

Drama as Kimilili students go on rampage over ‘cruel’ prefects