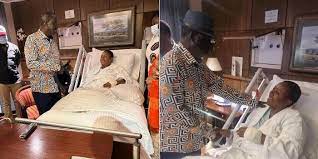 After a lengthy visit of the Coastal area, where he promoted his 2022 presidential ambition, the ODM party leader returned to the city on February 22 in the evening.

On Tuesday, the Murang’a Woman Representative was scheduled to testify before an IEBC Panel in response to allegations of poll rigging she levelled during a past campaign rally.

Ms Chege has been hospitalized since February 16, according to IEBC Chairperson Wafula Chebukati, who confirmed the report.

“Counsel has produced a document addressed to whom it might concern. The letter indicates that Sabina Chege was admitted at the Nairobi Hospital from 16th February and is undergoing treatment and that she is unable to attend to any of her duties,” Chebukati stated.

“We have a problem with this statement of the breach. From the charge, it is a redacted version of what Sabina Chege said. There is no clear assertion. You are not telling us clearly what she is accused of saying,” SC Orengo remarked

Chege contended at her preliminary trial, through her attorneys, Senior Counsel James Orengo and Senior Counsel Otiende Amollo, that she was given a clear explanation of the allegations before her.

Sabina’s defense team also wanted a complete transcript of Murang’a Woman Rep’s remarks, claiming that the allegations were false and that Sabina was not to react.

The Siaya Senator went on to say that the violation in question occurred during the 2017 General Election, for which a Supreme Court judgement cleared the IEBC, not the Jubilee party, of guilt.

Senator Orengo requested that the Panel withdraw from the case, claiming that the wording in the violation could be grounds for an investigation into the Commission itself.