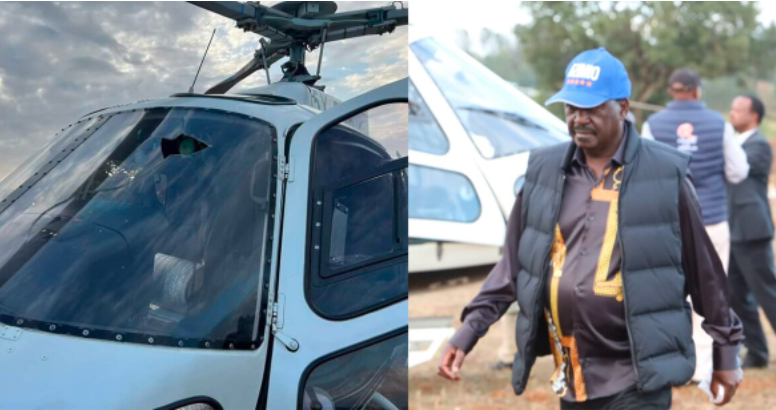 Odinga and other Azimio La Umoja leaders were in the region for the funeral of businessman Jackson Kibor.

“In the event that took place at Kabenes in Uasin Gishu, youth attacked my plane, destroying the air shield with rocks that were clearly aimed at me. On my way to the plane, they had pelted my vehicles with stones,” said Odinga in a statement.

He further said: “My mistake was to attend the burial of my longtime friend Mr. Jackson Kibor. I thank the security officers who did everything to ensure our safety.”

Odinga blamed his competitors for the attack, which he characterized as politically motivated.

“The threat came in the form of youth; mobilized, armed and paid to cause mayhem and disorder, destroy property and even take away lives in a bid to create political zones in the country,” reads the statement

Junet Mohamed, Suna-East Member of Parliament who was one of the leaders on board, uploaded photographs of the damaged chopper on social media.

The plane’s air shield was broken in the images.

Junet also accused their political opponents for the event, claiming that they had to find alternative transportation.

“Today we almost got killed in soy constituency Uasin Gishu County at the Burial of Mzee Jackson Kibor’s burial. Our chopper was completely destroyed and we had to look for alternative means mid-air…,” he said.

Was the Irate Mob Paid to Pelt Raila’s Chopper in Iten?