Reasons replacing a damaged helicopter windscreen could cost over KSh10M 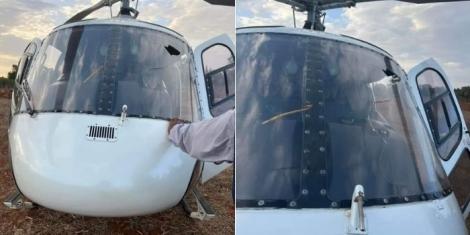 The cost of replacing a helicopter air shield smashed by unruly youths in Soy, Uasin Gishu on Friday could exceed Sh10 million.

According to Major (Rt) Thomas Samoei, a senior instructor at the Kenya School of Aviation, such instances may result in an increase in aviation insurance prices.

“Normally, insurance cover for a chopper is Sh10 million per year. But the companies hiring them out for political activities would consider increasing the cost of cover against any eventualities,” he said.

One of the explanations why the young were able to attack ODM leader Raila Odinga’s helicopter during the burial of businessman Jackson Kibor was due to laxity among security officers during political campaigns, states Samoei.

He went on to say that such instances will alarmed helicopter owners, who may be obliged to take drastic measures to preserve their expensive aircraft.

Most of the choppers used by local politicians are rented from aviation companies, said Samoei, the former president Daniel Moi pilot.

He claimed that due to import delays and a lack of locally available parts, replacing the broken windscreen might take three months.

“In Kenya, we don’t have ready-made spare parts and the company will have to source from agents in South Africa.

“Then again, the same dealer will have to purchase from either US or Europe in a process that would take about a month,” he stated.

He went on to say that a helicopter windscreen costs around Sh7 million, and that when the dealer buys one and sells it to the company, the price will skyrocket due to customs and import fees.