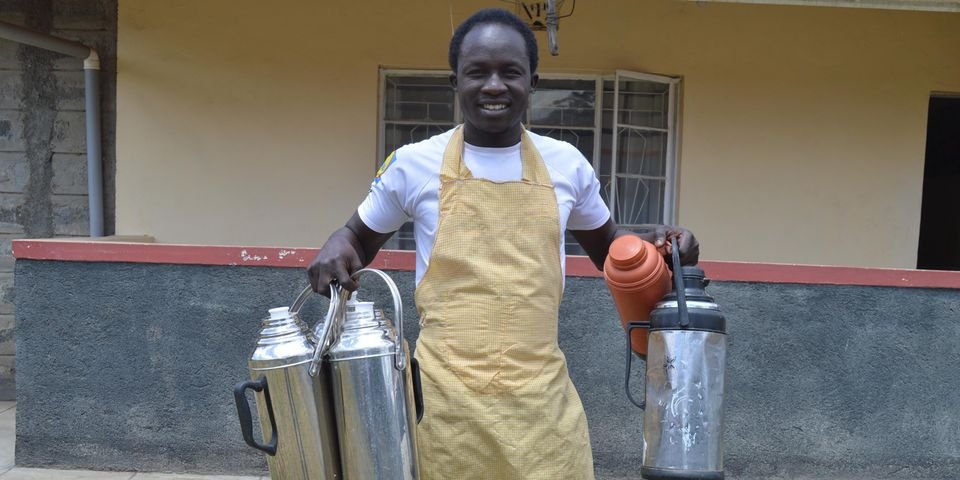 As he criss-crosses the streets of Nakuru town carrying two flasks in a bag, he may be mistaken for an ordinary hawker eking out a living at the Central Business District.

But the towering Nyok Luat is not your ordinary hawker. Luat is just one of the thousands of South Sudanese refugees who have been forced from their homes by war.

After fleeing his war-torn country, he came to Kenya and is now making a living by selling porridge to raise schools fees to pursue a career in International Relations.

“I want to go back to college to study International Relations and hopefully one day I will go back home and be a peace ambassador. After experiencing all this, I’m interested in investing myself in this career and helping people in the best ways,” he says.

In 2014, he fled by bus to Kenya, from South Sudan via Kampala, Uganda, then eventually to a refugee camp in Kakuma, where he lived briefly before travelling to Nakuru town.

Luat recalls a week-long trek through the bushes.

“I had no clue where I was going. The journey was a difficult one,” Luat says. “All I needed was to leave the borders.”

Life in the refugee camp was lacklustre. Luat remembers it as an isolated place especially for a young person.

“That’s where I began my life. My normal life,” he says.”It’s tough, it’s tough to be a refugee. Being separated from my mother and not knowing if I will see her again is frustrating.”

Luat says his father, Francis Luat, was a commander under the late John Garang rebel army and died in the civil war.

He spent sometime in a refugee camp in Kakuma before joining Class Seven in 2014 and in 2015 he sat for his Kenya Certificate of Primary Examination (KCPE) at Kariba Primary School in Nakuru town and got a C Minus.

“I qualified to go to university but since I was a refuge, I could not apply as Kenya Universities and Colleges Central Placement Service regulations bars refugees from applying as they only allow residents.

“I decided to start selling porridge to raise money for my college fees,” says Luat.

But it was not a walk in the park when he embarked on the journey of making porridge in February 2020.

“On the first day, the three litres I made went bad as nobody bought,” he recalls.

However, that did not deter him from making more porridge the following day.

“I was selling a cup at Sh20, Sh30 and Sh50 depending on the size. After they tasted it, the demand shot up and since then, business has been good,” says Luat.

On average, he makes between Sh500 and Sh1,000.  He advises refugees to stop relying on handouts from Government and relatives.

Related Topics:NewsNyok Luat
Up Next

PRIME Kenyan soldier in US working on Elon’s SpaceX