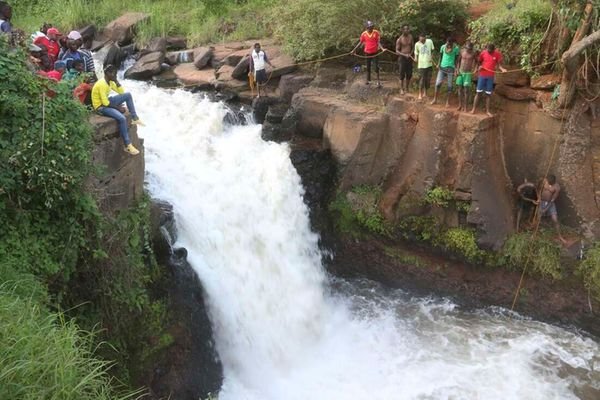 Police records indicate Nicholas Maithya and Asman John Kamau jumped into a swollen River Chania to escape arrest after they were found at a chang’aa den last Saturday.

Relatives and friends, however, insist the two young men, both aged 20, had not been to any chang’aa den. They rubbished the police narrative, saying the two were fishermen and that Kamau had even wondered aloud – as they were being handcuffed – why they were being arrested.

“I saw the two, they had been handcuffed together and Kamau was complaining loudly that he had no idea why he was being arrested. I even asked one of the officers why they were arresting the two and I was told to shut up and mind my business,” claims Mr Peter Mbaka, who insists he witnessed everything from about 40 metres away.

“It was around 4pm. One of the officers hit Kamau on the back of his head and as he fell into the river, he dragged Maithya with him since they were jointly handcuffed,” he further claims.

Mr Mbaka told the Nation he was well known to the boys and their parents.

“They usually came to my shamba to hunt for worms, which they used as bait in their fishing expeditions along River Chania,” Mr Mbaka said. “If they are found to have drowned, the two officers should be held liable. To me, it was simply murder of two innocent boys.”

At Ithanga Police Station, however, the occurrence book (OB) record indicates the two were at a chang’aa den in a village called Rubiru in Kakuzi/Mitubiri ward, along River Chania.

The report reads the two were feared to have drowned while escaping arrest and efforts to search for them in the swollen river had commenced under the leadership of the area police boss.

By Thursday, the sixth day of the search, no trace had been established, with bad weather, violent waves in the river and poor technology hindering the operation.

On Thursday morning, the search had to be suspended after the motorboat a team of five rescuers was using was overwhelmed by the waves.

“It was swept offshore where it hit a tree on the banks of the river, before it was swept back into the main course of the river… there was a real risk of capsizing but, by luck, it was navigated back to the shores and we had to call off the effort,” says Gatanga Directorate of Criminal Investigations (DCI) boss John Kanda.

Meanwhile, Maithya’s mother Lucy Kanini, 64, and Kamau’s mother Beth Mumbua, 32, called on witnesses to come out in large numbers and counter what they termed “police spin”.

Ms Kanini said her son was not a criminal and, for two years since he completed secondary education, he earned a living by hawking fish so as to save money as he was keen to enrol for a Plant Operator course in Thika town.

For her part, Ms Mumbua said her son was law-abiding and despite having dropped out of school at Class Eight four years ago, he fished to earn a living and was looking to join a local polytechnic to pursue masonry.

The parents expressed fear the police would do anything to erase the evidence that the two were handcuffed at the time of plunging into the river.

“I just want the world to know the truth about this issue. If the officers are found culpable, they should be punished and if it is true the boys jumped into the river to run away from the police, that should also be proven,” said the families’ spokesman, Mr Peter Kyatha.

“When such conflicting positions arise, we have to be methodical. The first thing is to get the missing persons whether alive or dead. If alive, they will be in a position to tell us what happened. If dead, postmortem results will give us a fair insight into what happened. We cannot rule out that they are alive. If it is true that they jumped into the river, they must have had their calculations. We also cannot rule out that they are dead,” Mr Kanda said.

“What we have now as a working variable is the situation report that was filed by the officers. But my priority now is to get the two. And I can assure you that we are not in the business of covering up any act of crime. If our officers were in the wrong, it will come out. If they are clear of blame, it will be manifest,” he said.

The two mothers complained that the delays in conducting a credible and organised search by the government made them fear for the worst.

“If it were a big man or woman’s son, even the Interior Cabinet Secretary would probably be  here to coordinate the search. The President would have since issued a directive; but because we are talking about sons of peasants, that is why the mission is even being called off in the morning. Every single day of this search is taking away my life,” said a distraught Ms Kanini.