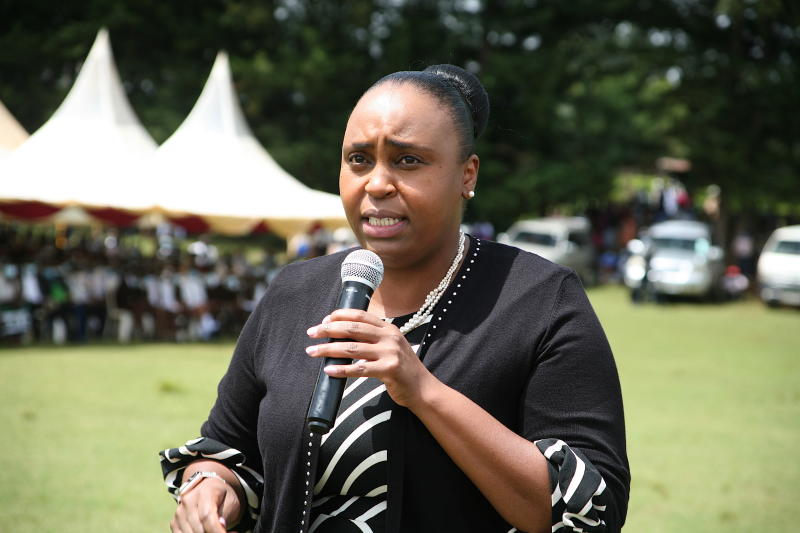 Embattled Nyeri deputy governor Caroline Karugu has gone to court seeking to have her boss compelled to release her salary withheld since November 2019.

In an application at the Labour and Employment Court in Nyeri, Ms Karugu who was appointed by governor Mutahi Kahiga in April 2018 claims that her boss has suspended her salary and locked her from out of office without justifiable reason.

It is a case that is likely to throw into the limelight the clash of egos between the fourth Nyeri governor who is a former teacher and unionist against the photogenic DG, an Investments and Finance expert. She came in to fill the void after Kahiga stepped up to pick the place of governor Dr Wahome Gakuru who died in a road accident in November 2017, just three months after his election.

Dr Karugu was sworn in on May 4, 2018 after being approved by the county assembly but the honeymoon with Kahiga didn’t last long and court papers show she fell out badly with her boss by the next year.

In the court papers filed by her lawyer Harrison Kinyanjui, Ms Karugu claims that she has been blocked from using her office since November 2019 and compelled to use her own resources to fuel her official county government vehicle.

“She has preserved to the point she cannot do so any more,” she says in the petition.

She says besides her withheld monthly salary of Sh685,250, she has been denied periodical phone allowance and entertainment allowance last received in November 2018.

“The claimant’s office requires assured security and she was compelled to secure this by her own means for which she incurs a monthly expense of Sh15,000 without the respondent’s regard to her safety or well being as she discharges official county duties,” she further claims.

She adds that she is not invited for cabinet meetings anymore and has not received her House Allowance since November 2018.

She accuses the county government and governor Kahiga of  stripping her off all her support staff at the deputy governor’s office in order to cripple her politically and stripping her of dignity and subjecting her to social ridicule.

She names some of the staff transferred from the office as her office secretary and and messenger.

She also claims that attempts to resolve the tiff through phone calls to governor Kahiga and a demand notice has failed forcing her to resort to court action.

She is seeking a declaration that she is being subjected to illegal and unlawful actions breaching the law and the constitution as well as payment of her withheld salary and allowances plus special damages totalling Sh442,107 plus monthly payments for security at Sh15,000.

She also wants the county government to be ordered to pay her general damages for unlawful actions, costs of the suit and interest on sums awarded at 27 percent per annum until fully cleared.

The case was yesterday approved for hearing under a certificate of urgency by the Deputy Registrar of the Labour court in Nyeri.