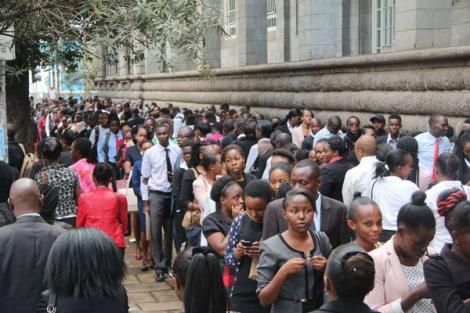 Potential employers can no longer demand clearance certificates from job applicants before hiring them.

According to a new law signed by President Uhuru Kenyatta yesterday, an employer should first hire a person before requesting documents from government agencies such as the Ethics and Anti-Corruption Commission, the Credit Reference Bureau, the Kenya Revenue Authority, or the Higher Education and Loans Board.

The Employment (Amendment) Bill, 2019, was introduced by Nominated MP Gideon Keter, who has been advocating for the elimination of this requirement, claiming that it is too expensive for graduates to amass the funds needed to obtain the credentials.

The law was supported by the President.

“The new Employment (Amendment) Act gives reprieve to job seekers by requiring employers to only ask for clearance or compliance certificates “upon granting an offer of employment to a prospective employee.” Previously, prospective employees were required to avail such documentation during a job application,” a State House communiqué said.

Keter recently stated that government organizations should not view job hunting as a revenue-generating endeavor.

“The issuance of clearance certificates ought not to be treated as a revenue stream by public entities mandated to issue the same. The CRB charges Sh2, 200 while DCI charges Sh1, 050 for a Certificate of Good Conduct,” he said.

Young people, according to the MP, were the ones suffering the most as a result of the regulations.

“They are mostly first-time job seekers who are unable to pay for the clearance certificates required by employers. The Bill seeks to cure this by providing that employers may only request for any clearance or compliance certificates only upon granting an offer of employment,” he added

Khalwale goes Hunting as Omukoko Gets ready for Kakamega Race