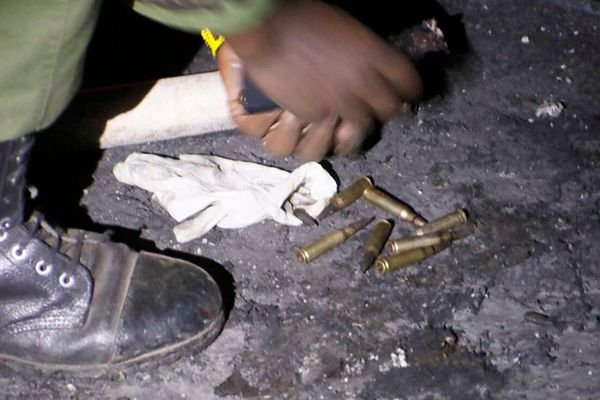 Had Inspector David Opiyo driven a little longer on the day he was arrested, the General Service Unit (GSU) senior officer who was charged on Thursday for unauthorised possession of government ammunition may not have been alive for his trial.

The inspector, who last Tuesday reported at the Ruai Police Station that he had been abducted before being placed under arrest, had just left the GSU Training School in Utawala, Nairobi at 12pm, before he suddenly realised that he was being followed.

On the back seat of his car – a brown Mitsubishi Lancer registration number KAT 887G that he had borrowed from a friend to use for an errand –  were 2,040 7.62×39 millimetre bullets, which are mostly used by high calibre rifles like AK 47s packed in 34 carton boxes.

Whether someone tipped Inspector Opiyo or his instincts told him he was being followed will be known in the coming days as investigators go for the people he was talking to after a forensic analysis of his two phones is completed.

For now what is clear is that someone was after his life. After driving for about 3km, the inspector abandoned the car at a garage along the road, boarded another vehicle and immediately escaped from the scene.

A few moments later, another white car arrived at the garage and an armed man stepped out and sprayed bullets on the driver’s side.

“Crime personnel visited the scene and established that the motor vehicle KAT 887G had 20 bullet holes on the right rear door with glass windows shattered with some bullets having exited through the windscreen,” a police report would later say.

Although the Nation cannot discuss the merits and demerits of Inspector Opiyo’s case since he has already been charged, the events preceding his attempted assassination have lifted the lid on an underground ammunition sales racket involving rogue officers in one of Kenya’s most elite security force.

The racket, which has been smuggling thousands of bullets out of GSU training camps and into the hands of criminals, is now believed by those in security circles to be fuelling the insecurity currently being witnessed in Laikipia, Baringo and West Pokot.

Hot on the heels of these rogue officers is a clandestine squad whose job is to hunt down, detain arbitrarily or execute whoever is discovered to be involved in the mass stealing and sale of government bullets to bandits.

And at the centre of this racket are a number of politicians from the troubled northern regions who are buying the bullets in large quantities and passing them to their communities so that they can arm themselves for self-defence, carrying out cattle raids or to simply perpetuate violence.

While we are not at liberty to give names of the specific politicians since they are still being investigated for their roles in this deadly scandal, an MP from Isiolo who intelligence sources say was the customer of the 2,040 bullets seized last week in Utawala and a former MP from Laikipia are being probed.

Ironically, the GSU, a paramilitary wing of the National Police Service, is usually the last resort whenever there is a serious security issue like a protest, a terror attack, cattle rustling or clashes between communities due to the high-level training its officers go through.

These trainings, which include spending several days in shooting ranges, involve shooting thousands of rounds of live ammunition. The AK47, which is the standard infantry weapon for Kenya’s security agencies, carries a maximum of 30 bullets in its magazine but insiders say one officer can be given up to 300 rounds per training session.

“Officers are supposed to account for all bullets spent at the end of each training session and they sign a sheet stating the number of rounds that they received and how many are remaining,” an insider told us.

“These records are then forwarded to those in-charge of armouries for recordkeeping and to help in future planning,” said the insider.

However, because of the bureaucracy involved when requesting for new ammunition which could affect training plans, some of the officers in-charge of the training ranges hold on to some of the bullets left after the sessions.

In order to achieve this, officers are told to overstate the number of bullets that they have spent during a particular session so that the balance can remain for the next team to use in case there is a delay in getting a new cache of ammunition.

While this practice has been there for a long time and has never raised any eyebrows in the past, some of these unaccounted for bullets are finding their way to gangs, robbers and bandits who are causing havoc.

Additionally, the armouries of GSU camps across the country are heavily stocked with ammunition due to the nature of the work the officers do that require them to have several rounds of bullets with them whenever they are sent on assignment.

When we posed this question to the Police spokesman Bruno Shioso, he said the National Police Service is aware of the matter and is on top of the situation.

“I do not want to speculate, it is a matter that has been taken up by the DCI and they are doing investigations. It is an issue I will not speculate or talk about,” said Mr Shioso.

“Let us just wait for the findings and maybe talk to the DCI. They are the ones who can give an update since they are the ones investigating. What I can say is that we are aware of the issue, we are on top of it and DCI is pursuing it right now,” he said.

These armouries are strictly controlled and have senior officers who are in-charge of them. How bullets still manage to get out of such a system and in large numbers before being sold to third parties without anyone noticing is the big question.

Since January, police have found 12,094 bullets in large caches while in the wrong hands. Three weeks ago, a group of rangers from the West Gate Conservancy in Laikipia recovered a cache of 2,640 bullets from two herders.

On June 2, eight guns and 177 rounds of ammunition were recovered by the police in Kitale from the house of a police officer attached to the Judiciary. Two weeks after the stunning recovery, a Chinese national, Dang Pengfei, was arrested in Mwingi, Nairobi. He had in his possession five guns and 205 bullets. Among the recovered firearms was one rifle.

A month before the arrest of Mr Pengfei, a caretaker in Nairobi’s Lucky Summer estate was shocked on May 4, when he stumbled upon an abandoned sack stashed with 478 bullets. Francis Baraza, the caretaker of rental houses owned by Hojan Investments, said he was routinely clearing the backyard at around 4pm when he saw the sack. Police said the items in the sack were 18 rounds of .38 special bullets, seven rounds of 9mm tracer bullets, 414 rounds of 97.62mm blanks, one expended round of 7.62 blanks, nine rounds of live 7.62 special bullets and 30 rounds of live 9mm bullets.

On April 14, detectives from the Directorate of Criminal Investigations (DCI) raided a house in Dagoretti where they recovered powerful firearms including an M4 sniper, four pistols and a close quarter Uzi automatic sub machine gun, capable of firing over 600 rounds per minute. Also in the cache were 3,700 rounds of ammunition.

READ ALSO  VIDEO: 60-Year-Old Mzungu sells everything and Moves to Kenya to Marry 29-Year-Old Woman whom he met on FB

Two weeks before this shocking discovery, three suspects were arrested in Garrisa transporting eight rifles and 2,104 bullets after a four hour chase by the police.

And in January, a GSU officer was arrested in Kikuyu after he alighted at Gitaru from a matatu he had boarded at Afya Centre in Nairobi and told the driver to call him when they arrived in Kitale. The rest of the passengers immediately discovered that the officer, who was later identified as Joseph Nyakaor Chagem attached to the GSU training school, had left a black bag.

“Other passengers suspected the behavior of the said passenger thereby advising the driver to hand over the bag to the nearby Nderi Police Post,” said a police report about the incident.

At the station, police officers who opened the bag found it had a sealed metal box which upon opening was found carrying 750 rounds of ammunition. While it is not possible to ascertain the extent of rot at the armouries belonging to the GSU, the fact that they are feeding deadly conflicts which the same unit is called upon to deal with is not only puzzling but worrying.

Within the last one month eight people, among them three police officers, have been killed in the ongoing clashes in Laikipia West while hundreds more have run away from their homes. At the moment Laikipia North and Laikipia West constituencies are declared as disturbed zones.

Three GSU officers, two in active service and one former servicemen, have been killed in a span of two months in unclear circumstances. An extra two officers have been abducted and are yet to be found.

The latest victim of enforced disappearance was Sergeant Ahmed Osman Omar Godana who is a former GSU trainer. He was abducted by four armed men while driving from his home in Isiolo two weeks ago along Thika Road as he neared Blue Post Hotel in Thika. Three passengers in the car who witnessed the kidnapping say the gunmen had put on what looked like bulletproof jackets.