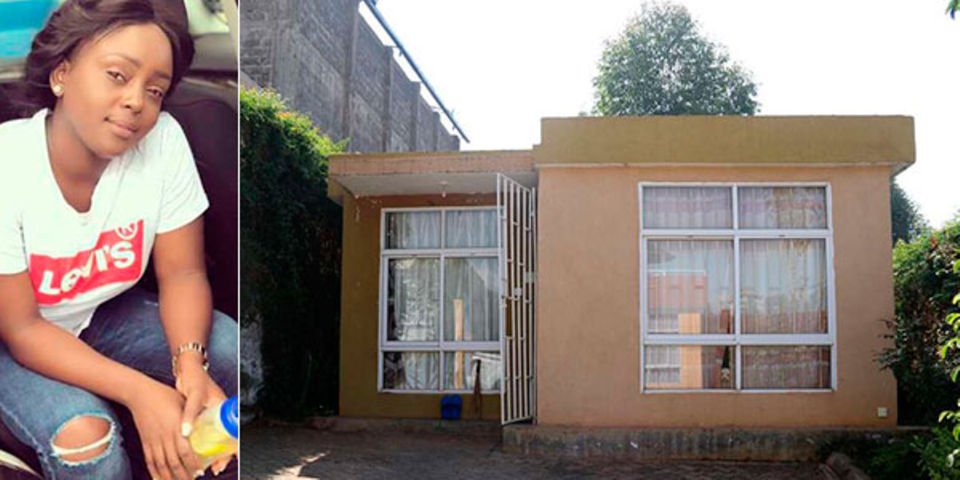 A day after Monica Kimani was killed at an apartment in Kilimani, Nairobi, a company that was reportedly selling a house to her, and with which she had signed a sale agreement, terminated the deal without informing anyone. Now, nearly four years later, her family is trying to get the house back.

She was in the process of buying a three-bedroom bungalow at Villa Maya Apartment, about 100 metres off Ndenderu-Banana road in Kiambu County.

This is giving her father, Bishop Paul Ngarama, sleepless nights.

According to reports, the bishop is about to lose the only remaining tangible investment his only daughter made, and that saddens him.

Documents show that Monica had partially paid for the Sh4 million house at Villa Maya from Tiara Investment Ltd. She signed the sale agreement with the company on April 10, 2017.

According to documentary evidence, the 0.0125-hectare property, named Kiambaa/Thimbigua/7488 was being bought by Monica, referred to as the purchaser.

Last week, the last witness in the Monica Kimani murder trial, Chief Investigating Officer Maxwell Otieno placed the first accused Joseph Irungu at the scene of the murder in Lamuria Gardens on the night Monica is alleged to have been murdered.

The witness, who took the court through items collected during the investigations and submitted them as exhibits told the court that Joseph Irungu and Jacque Maribe jointly murdered the 29-year-old Juba–based businesswoman in September 2018.

The agreement stated that upon completion of payment, the purchaser would receive a registration of transfer of the property. If she (purchaser) failed to complete the transaction on the completion date, she would be considered to have breached her obligations.

READ ALSO  Jalang’o: My mother has been bedridden for a while now

Tiara Investments Ltd would then serve a notice in writing for the purchaser to complete the transaction within 21 days from the day the notice is served.

The agreement also stated that should the purchaser fail to complete the transaction before the period expires, then they would be entitled, upon Tiara Investments’ sole discretion, to an extension of time to allow for completion, with interest accruing from the unpaid balance. Alternatively, the agreement would be revoked.

If revoked, the seller of the property would forfeit the Sh400,000 deposit as liquidated damages, but would refund the remaining balance to the purchaser.

Monica needed to have cleared the balance within 90 days from the execution of the agreement, which would have been July 2017.

However, on October 3, 2017, she signed a deed of variation of the sale agreement, which reviewed the terms to a Sh1 million deposit, and monthly instalments of Sh520,000 beginning November 1, 2017. This meant that the purchase price would be settled by March 1, 2018.

On the same day, she entered into a tenancy agreement with the same company, which was to expire on September 30, 2018. She was required to pay monthly rent amounting to Sh23,000 after submitting a deposit of Sh46,000.

On trial for Monica’s murder

Mr Joseph Kuria alias Jowie and Ms Jacqueline Maribe are on trial for Kimani’s murder. They have denied the charges.

When Mr Ngarama, through his lawyers from NOB Advocates, expressed his commitment to clear the outstanding balance, together with rent arrears that may have arisen prior to Monica’s death, his proposal was countered with an email on June 27, 2019, from Wangai Nyuthe & Co advocates, representing Tiara investments. He was informed that the directors wished to “utilise the property from the first day of July 2019, until such a time as any subsequent sale shall be concluded.” They also advised that Monica’s tenant needed to vacate the premises. There was no mention of how the money that had already been paid would be repaid. The last payment, according to email correspondence between the advocates showed that the last rent payment made by Monica was on March 26, 2018.

Another email sent to Wangai Nyuthe Advocates requesting processing of the title of the property on December 16, 2019, got no response, as did a follow up mail sent on January 8, 2020. The title would have allowed NOB Advocates to undertake the registration of transfer.

“Monica’s house has been sold to a Nigerian by the owner of the houses, who hasn’t accepted our proposal to clear Monica’s arrears even though we are willing and able to. They have shown us no mercy. Even though our lawyers say they have received no official communication, we also haven’t received any communication regarding receiving a refund of the money that Monica had already paid,” lamented Mr Ngarama.

“That is the only house that we can remember Monica for. It’s like a memorial for her. The owner of the estate was unfair to us. This is very wrong,” he said

Asked whether the parents, once authorised by court as administrators, will be able to go on with the same agreement that Monica had signed, Mr Wachira explained that the matter will be at the sole discretion of the directors of the company, considering factors such as the date of the agreement, date of completion, whether the terms of the agreement were complied with, time taken and humanitarian grounds. “If there was no breach by then, and the seller still feels like they can sell the item to them, they can still proceed. But I can assure you that nobody will take their coin,” he said.

Mr Ngarama, however, says that the claim that his daughter defaulted on payments is a lie, and that he has emails that prove otherwise.

According to Mr Anthony Wachira from Wangai Nyuthe Advocates, Monica had defaulted on both payments required of her before death.

Mr Wachira explained that even though the house may be in the process of being sold to another client, they are ready to discuss a new agreement with Monica’s family, only if they go to court to obtain a letter of administration and a certificate of confirmation of grant.

“I have talked to their lawyer and Bishop Ngarama. We are aware that there was a sale that was going on, and there was a breach on the part of Monica. At the time of death, the breach had been persistent for a whole year,” he said.