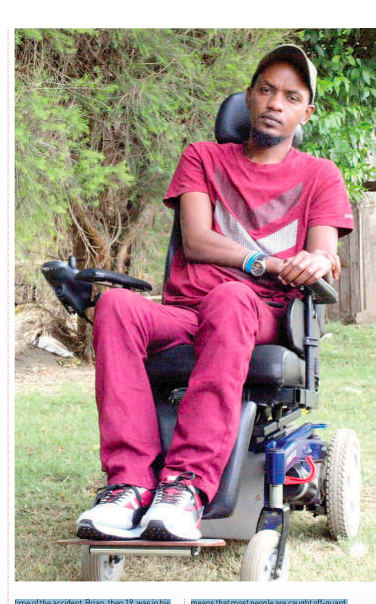 The lack of adequate psychosocial support for victims of road accidents in Kenya, presents a yawning gap in their care and management, an investigation by ScienceAfrica Journal reveals.

Little has been done to institutionalise psychosocial support in the overall treatment regimen of a road accident victims in the country, with much of the focus and resources being invested towards their physical treatment needs. The problem is more pronounced among critically injured people, who are forced to contend with life-altering physical injuries amid underlying psychological trauma.

This is the case for Brian Muchiri. With a charming glint in his eye when he converses, a healthy gleam in his cheek, and a graceful smile bereft of remorse flashes on his face from time to time, there’s practically nothing in his face that would betray the catastrophic turn of events seven years ago that robbed him of the pleasures of young adulthood, and con-signed him to a wheelchair —for life. One day in February 2014, he was involved in a road accident.

Three of his friends died on the spot after the car they were travelling in collided head-on with a trailer along the NakuruKabarak road. Brian and one friend escaped with their lives. On the eve of the accident, a friend had urged Brian to sneak into town for some fun, in what would be Brian’s first night out.

“It was on a Friday night and I was already in bed, preparing to sleep. A friend called me up and asked me to join him and other friends to go out. I was apprehensive, but then I saw it as an opportunity to have fun, which was rare in the village,” says the 26-year-old. Unpredictable nature Brian has no recollections of the moments immediately following the crash. He was informed later on that well-wishers took him to hospital.

He surmises that, in the process of transporting him to hospital, the first responders may have handled him in a manner that could have worsened his spinal chord injury, despite their noble intentions. They put him in a sitting position in a car. His parents received a call that Saturday morning informing them of their son’s predicament in hospital.

“My injury affects my body in a big way because I have no feeling of sensation anywhere beyond or under my armpits. I’m what we call a quadriplegic: an individual with limited or no use of both limbs. I don’t have use of my lower limbs, but I have limited use of my upper limbs. The bigger muscles work – like my biceps – but I have no movement beyond my wrists. I can’t control my fingers,” he says. The firstborn among three boys, Brian also lost control of several body functions.

At thetime of the accident, Brian, then 19, was in his third year at a local university campus in Nakuru town, pursuing a course in purchasing and supplies. Depression would eventually set in, as he came to terms with his predicament. “My youth was affected by the disability,” Brian said at his home in Mangu, Nakuru county.

“I can’t be at par with my peers. As they finished school I was still recovering. As they got jobs and started families, I was still here. I am a few steps behind in milestones you may think of in normal progression of life.”

The unpredictable nature of road accidents means that most people are caught off-guard, with little or no means of countering the emergent challenges. “You can’t reason when you’ll have an accident, and you cannot necessarily precipitate it, or anticipate it, unless you go the insurance way,” said Dr Geoffrey Wango, a Senior Lecturer in counselling psychology at the University of Nairobi. “So, when an accident occurs, most people go through the stages of grief – shock, disbelief, anger, negotiation and eventually, acceptance. When people get involved in accidents, they usually don’t know how to deal with.