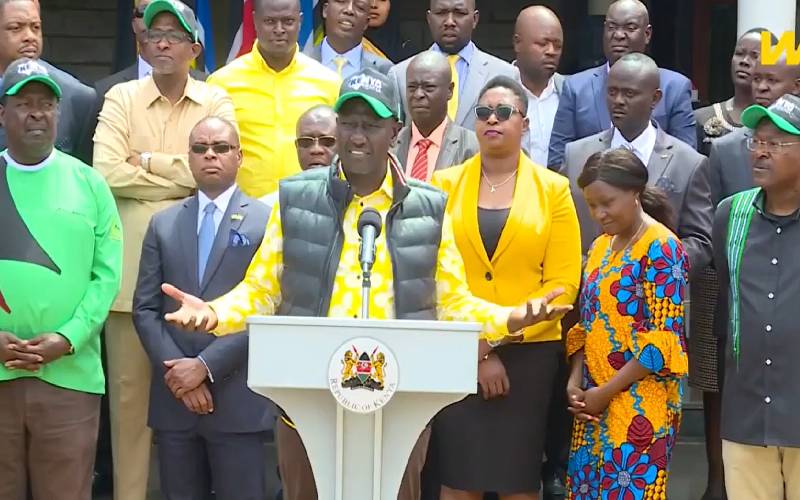 Kenya’s Deputy President says that if the Kenya Kwanza Coalition assumes power, it will review some of the mega deals like the Standard Gauge Railway (SGR) project, which he claims was hijacked to enrich a few individuals.

Dr William Ruto was speaking Tuesday at his Karen residence when he welcomed the Pamoja African Alliance (PAA) party led by Kilifi Governor Amason Kingi to his Kenya Kwanza coalition.

He said that should Kenya Kwanza win the August 9 election, they will undertake administrative and legal steps to reverse some aspects of the project which, he said, had become the biggest impoverishment to the people of Mombasa and the Coast region.

“It was never the intention of the government to build the SGR so that the Coastal people can be impoverished. The SGR was meant to make the port much more efficient and to improve the business and the fortunes of the Coastal people,”  he added.

“Unfortunately, a few people took hostage the whole project and ended up with selfish programs to the detriment of the Coastal people.”

“We as Kenya Kwanza have signed a commitment with PAA on matters they have brought to the table; matters to do with the land, economy, and public inclusivity of Coast people,” Ruto said.

At the meeting, Kingi revealed that they had signed a pre-election pact with Kenya Kwanza that would among other things, reverse all operational changes carried out in the recent past, whose effect has been to relocate some of the core activities of Kenya’s main seaport from Mombasa to inland depots in Nairobi and Naivasha.

“The port operations have all been moved inland and that has caused immeasurable suffering to the people of the Coast region, hence the need to reverse that,” Kingi said.

Controversy surrounding the cargo handling business at the Port of Mombasa amid reports over its leasing out by the State has been rife for some time now..

Three years ago,  there were concerns about the handing over of the running of the Second Container Terminal and one berth to the Kenya National Shipping Line (KNSL), which is partly owned by private firms.

Campaigns by global port operators through their local agents painted KNSL as ‘inept’ or unable to run the terminal as they prefer a concessionaire from outside the country.

The opponents of the KNSL deal also alleged that this will give Mediterranean Shipping Company (MSC) an undue advantage against rivals.

The Maersk Shipping Line which controls at least 40 per cent of cargo passing through Mombasa was also angling for the national liner but was elbowed out by MSC.

MSC has about 20 per cent shares in KNSL and in 2018 signed a Memorandum of Understanding (MoU) with the Ministry of Transport to revive the moribund KNSL.

Proponents of the KNSL deal said it will catapult the nascent local blue economy given MSC signed an MoU with the government to offer jobs to thousands of locals.

As part of the recovery strategy, the State wanted to give MSC the sole mandate to handle cargo at the second container terminal. It will also handle cargo consolidation.

“Consultations and decisions are made by a few and forced down the throats of the majority of the constituent parties,” he said.

A 2019 report by the University of Nairobi said Mombasa’s economy would shrink by 16.1 per cent with 8,111 jobs lost if all cargo is evacuated by the Standard Gauge Railway (SGR) from the port.

According to the study done by the university’s School of Business and released after year-long investigations, the county had already lost Sh17.4 billion and 2,987 jobs equivalent to 8.4 per cent of its annual earnings since the implementation of government policies requiring the mandatory transfer of most import cargo through the Madaraka SGR freight service to Nairobi in 2017.

Wile drumming up support for the economic revival of the Coast said they feel welcome in Kenya Kwanza, as opposed to  the Azimio la Umoja  One Kenya alliance, which he claimed was shrouded in ‘disturbing’ deep secrecy and mistrust, making him feel unwelcome.

Software Engineering Listed amongst the Most in Demand Careers -Expert