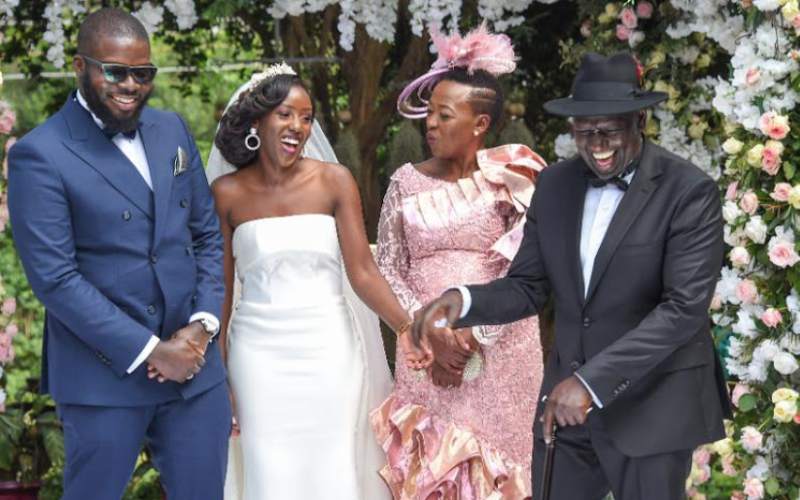 DP Ruto left guests in stitches at the reception after he joked that it was difficult to give away his daughter to a Nigerian due to his past experiences with them.

The DP, amid laughter from the guests, narrated the story of Anthony Chinedu, a man who hit Kenyan headlines for sometime and had to be deported.

“It is much more difficult when you are giving your daughter to Ibos (people living chiefly in southeastern Nigeria who speak Igbo),” said the DP as the crowd burst into laughter.

Adding: “Because when I first met Alex I told him a story of a guy called Chinedu who gave us a lot of trouble and I was told that man was an Igbo.

“So you can understand…this Chinedu fellow gave us so much trouble that we deported him to Nigeria and when we deported him he refused to get out of the aeroplane in Lagos for two days. Even after leaving him there we found him in Kenya.”

Ruto advised his daughter to submit to the husband as she was now someone’s wife and gave the couple his blessings.

Ezenagu’s people, though few, cut figures of gentleman ready to be new members of the Ruto family.

The best man, Ezenagu’s kin, was dressed in a black classic suit. The couple’s wedding comes nearly three weeks after Ruto –  on May 8 – hosted Alexander’s family at his Karen residence, where the Nigerian sought the DP’s permission to marry June.

The new addition to Ruto’s family is an assistant law professor at the Hamad Bin Khalifa University (HBKU), a public university in Qatar’s capital, Doha.

My spell in prison won’t define my daughter and I