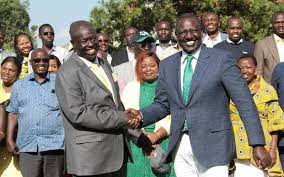 Tension rocks DP William Ruto’s presidential bid after his ardent supporters led by Nakuru Senator Susan Kihika and the astute debater Kimani Ichungwa who is currently serving as the Member of Parliament for Kikuyu Constituency denounced the choice of DP Ruto’s for a running mate.

They said they took the past five days to reflect and consider the pros and cons of the pick of Rigathi Gachagua as the Kenya Kwanza Coalition presidential running mate.

“We have all had at least four days to reflect on this matter of running as it is. It is no secret that we as Mt Kenya UDA caucus found and still find, Hon Gachagua to be a crass, abrasive and unnecessarily combative politician hardly able to build bridges across the country. Hardly 24 hours after being appointed, he was on the campaign trail perpetuating what was a clear case of misogyny with his “huyu mama” comments. Unfortunately, this is the Gachagua we warned the DP against,” Ichungwa said

Kihika noted that latest opinion polls and their own ground research show that Gachagua will lose them this election.

“First, he is not wanted beyond Mathira, but more importantly, the rest of the country sees him as an avowed Kikuyu supremacist and primitive accumulator of ill-gotten wealth. This image is not an election winning one,” she said.

“We are aware our party leader ,whom we respect very much,will stick with Rigathi to the end. But we write this so that we go on record as having opposed this choice. What we are all resigned to is that following Karua’s pick by Azimio, we are headed for a resounding defeat. Gachagua was the wrong choice and we do not want to be associated with it,” said Ndindi Nyoro.