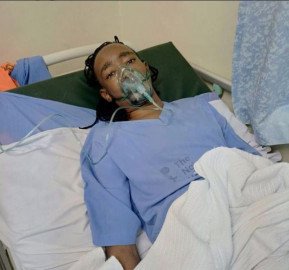 Popular Kenyan comedian Akuku danger has been ahospitalized after one of his lungs collapsed, according to sources close to his family.

Kenyan media outlets reported that the former Churchill-show comedian was initially admitted to Nairobi women’s Hospital, Rongai, last week and was re-admitted a few days later, after his health took a turn for the worst.

According to his  friend and fellow comedian Sandra Dacha’s post on Instagram, Thursday, Akuku Danger is currently fighting for his life in the Intensive care unit.

“This photo was taken last week when he was admitted at Nairobi Women’s Hospital-Rongai and was discharged, put on medication, and now he has been re-admitted,” he wrote.

“One of his lungs has already collapsed and is currently in the I.C.U fighting for his life. I ask you all to keep him in your prayers, God is a faithful GOD. Let’s all trust in him.” wrote Dacha

Another close friend Boaz Hosea also confirmed through social media that the comedian is yet to be transferred to Nairobi West Hospital where a deposit of Kshs 200,000 is expected.

“He is to be transferred to Nairobi West Hospital as soon as possible, but they have asked for a deposit of 200K.”

“We are appealing to friends to help us raise the amount,”  wrote Hosea.

REVEALED: Why young men are attracted to older women