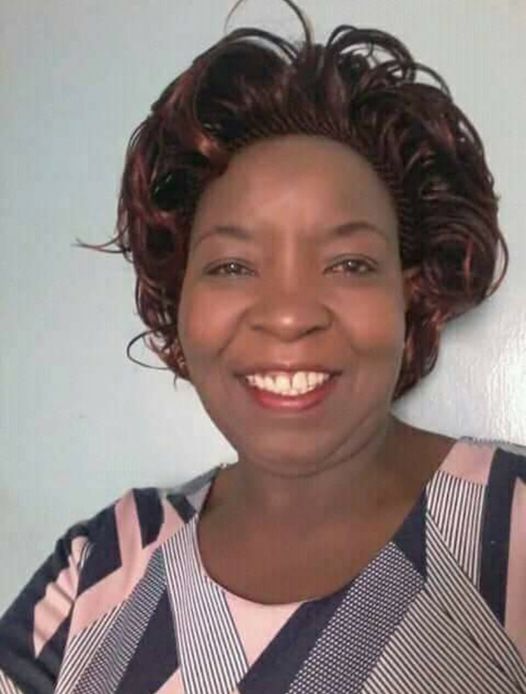 The Kenyan theatre fraternity is mourning. Catherine Wanjiru Kariuki (Cathy Kariuki), a thespian per excellence, has passed on.

She died on Sunday, April 4th, in Nairobi.

Cathy, a cancer survivor, touched the lives of so many in the several decades that she was on the theatre scene, and later, as an anti-cancer activist.

She has starred in countless movies and stage plays as well as organising art events in and out of Kenya.

Cathy had been unwell although her actual cause of death is yet to be determined, according to family members.

Details released by the family indicate that she will be buried on  Friday April 9th in Kinamba,  Naivasha, Nakuru County (more details to follow).

Here are a few tributes:

We met decades ago at the KNT or Kenya National Theatre, you a super actress and a great fan of great theatre works.

You always gave a thumbs up to the great actors I worked with. You then later made it possible for me to attended the World IDEA Congress with you in Hong Kong.

Then at formation of IPAL – Institute of Performing Artists Ltd – & EATI- East African Theatre Institute, we worked together as board members.

You always worked hard to support artists and for the use of theatre as a social intervention tool. You cared about Kenyas’ theatre and thespians. We thus worked on the IPAL Prisons project together. We later on also worked as Moderators on the Peace Building Initiative after the 2007/08 PEV, where we visited many hot spots for intervention under the USAID & GIZ project. I then later went on to join Docubox – a doc.

film development org. in Kenya. A few years later, you were diagnosed with cancer but not letting it put you down, overcame and then became a great stomaworld champion where many cancer patients knew you as their warrior out of the many generous initiatives you got involved in.

I give thanks for the great times we spent together just as many artist will attest. We’ll surely miss you. Cathy, you were a gem. Fare thee well.

I met Cathy in Bangalore India 2016 where we were both undergoing treatment. We became a family. Cate and her nice Grace had been in India before us so she had more info about the stay there.

She became one of the much needed helper there. Hotels around the hospital were very expensive, she came up with an idea of an appartment where we could cook our own food since we were not used to Indian food. How she got a place i cant tell. Your care giver became our cook.

Cathy came up with an idea of buying prescriptions outside the hospital cheaply, how she got the connection i cant tell. This made us save alot on medicines. She was always ahead with ideas. Visiting other Kenyans in H.C.G hospital became her daily routine. Where she got the energy, I cant tell. She became a counselor to those who lost their loved ones in India.

Aunt Catherine, like I used to call you, no week could end without you checking on me. Even in your last days you texted me while still on oxygen and assured me that you are doing well. Its hard to believe am saying goodbye. You were beautiful inside and outside.

They say friends are the family we choose. Being chosen was the greatest moment of my life and when you passed, it has become the worst moment of my life. You defeated cancer we shall defeat it.
Sleep well aunt Cathy. Till we meet. 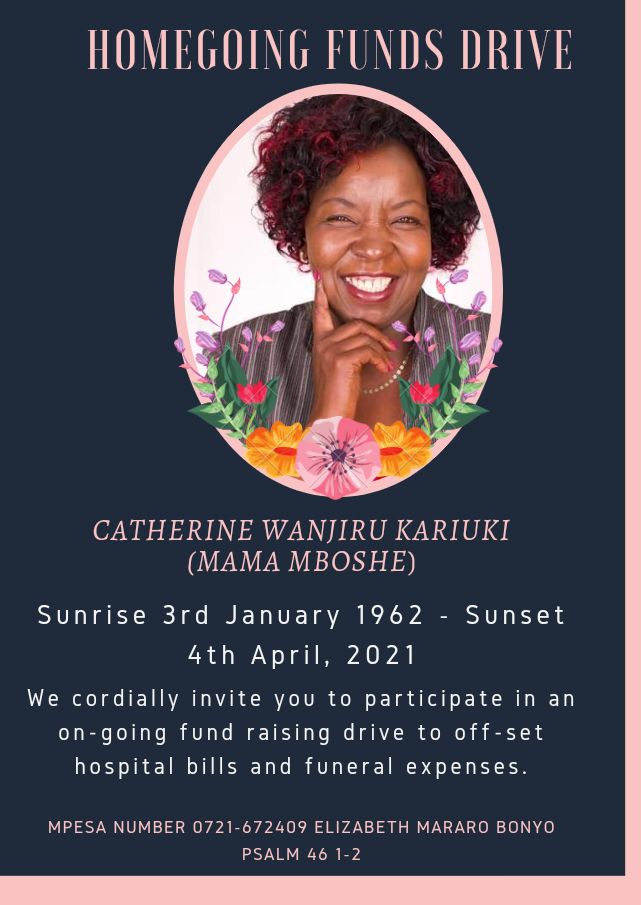 I loved to work with Cathy on my films. She was a great worker, versatile and disciplined. I’ll never forget when the make-up girl did not turn up and I just told Cathy that she had an extra job. She went off to buy a ‘kit’ and by the time the girl came with excuses, Cathy was doing the make-up without hitches and we were smoothly coping. She saved the day. Cathy, I shall miss your spirit, warrior.

I will miss my friend Cathy Kariuki. We were regulars at KNT in the 90s before I moved out of Kenya. I remember my wife and I had a great time with her when she accompanied us to Embu for one of our ‘Uthoni’ events and had many swallows and lots of nyamchom at Izaak Walton Hotel. so sad to learn thet she is no longer with us. May Cathy Kariuki’s soul rest in eternal peace and may the Almighty God give peace to the family. Amen

Ben Ateku
So very sad to learn of Catherine’s passing. Her ever~present smile and positivity will be missed by us all. Your contributions to the arts community are etched forever in our minds. RIP Catherine.
Edyth Luseno
Catherine my sister my friend.. Sail on my sister my friend… Will forever remember your love and friendship for me and my family. Rest in peace Cathy.
BY JPR OCHIENG

Dear Lord, I thank you for giving her the strength and the conviction to complete the task you entrusted to her.

Thank you for guiding her straight and true through the many obstacles in her path. And for keeping her resolute when all around seemed lost.

Thank you for your protection and your many signs along the way. Thank you for any good that she may have done, She is so sorry about the bad.

Thank you for the friend she made. Please watch over her as you watched over me.
Thank you for finally allowing her to rest. She is so very tired, but she goes now to her rest at peace. Knowing that she has done right with her time on this earth.

She fought the good fight, She finished the race, She kept the faith.

BY JK
I met cathy at Nairobi Nairobi Remand and Allocation Prison where Madam Pauline was the In charge and she was always ready to support prisoners and remanded inmates ….she was always ready to help and a few times we ended up at Reminisce for mugiithi…..l@ sweet memories. Madam Pauline also unfortunately went to be with the Lord on Saturday and I know they are sharing jokes 🙏🏽🙏🏽🙏🏽
Related Topics:Catherine KariukiCatherine Wanjiru KariukiCathy KariukiKenyan diesKenyan woman diesNews
Up Next