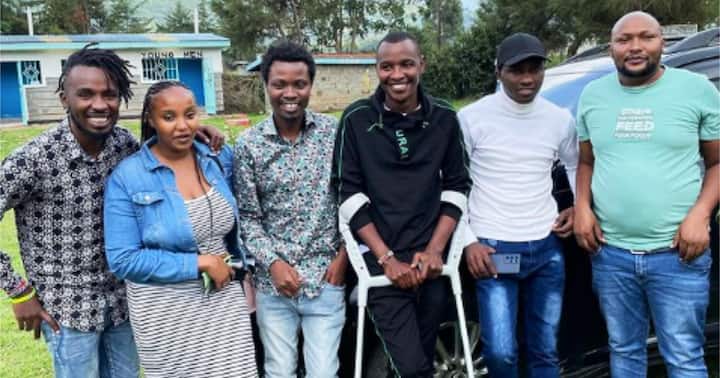 For the better part of 2021, Mugithi artist Samuel Muchoki aka Samidoh has been a man in the media spotlight.

Most of these stories have revolved around his escapades with politician lover Karen Nyamu, with appearances here and there from his first wife.

Perhaps, the most talked-about story was his admittance that he had sired a child with Karen even though he is married elsewhere.

That was followed with a supposed squabble between the two, brought to light through a video in which Karen was lamenting that Samidoh had broken her phone over suspicions that she was seeing someone else.

The latest news is that he is now hobbling around in crutches and a plaster around his leg.

According to the manager, the songwriter’s leg was injured during a stampede in which fans were struggling to take selfies with him during a performance in Mwea.

Details indicate that the fans pushed him backwards after which he sprained the limb in a steep-stone path.

His love for music, performing, and fans has seen him continue performing while seated.

“I may not be able to or run but I can still play guitar and perform. My fans want my voice not my legs,” Samidoh said in an interview.

US tour will go on

The injury comes at a bad time for the singer since he is set for a tour of the US next month, which could jeopardize his chances of travelling.

The manager is, however, bullish that the entertainer will still make it for the tour as planned.

“He injured his leg. He didn’t injure his voice or hand,” explained the manager.

The manager added that Samidoh still has over 10 shows this month, which he will honour before travelling abroad.