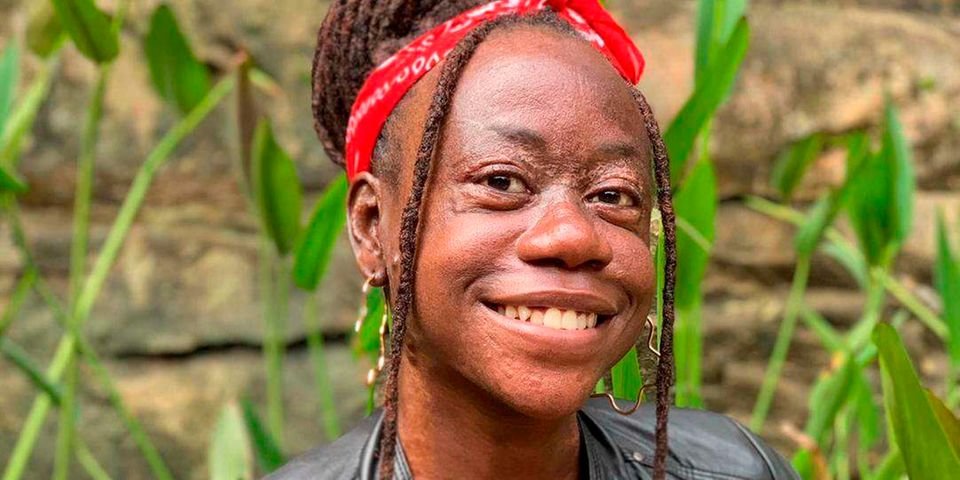 My name is Santalucy Fungaroh. I’m 21 and a third-year student at Makerere University, Uganda. I am the firstborn in a family of three girls. In 2005, when I was five years old, I began experiencing sore muscles and general body weakness. After a short while, I developed a skin rash on my right cheek, which swiftly spread to my ear. My health deteriorated further in ways no one could account for.

My skin became swollen, and I became fat. My skin turned pale with purple colour, and it worried everyone at home. During this time, my parents would take me to different hospitals in the hope of unravelling the medical puzzle in which I was entangled. The doctors, on all occasions, would resolve to prescribe painkillers to ease my pain. Even to them, my disease was a novelty, and they needed more time to establish what it was for appropriate treatment. The relief I got from the painkillers was temporary, and it only escalated the need to find a medical answer.

By January of 2006, I had lost my normal skin pigmentation. My skin had changed from pale with purple to visibly purple. At one point, I was diagnosed with syphilis. This made sense to my parents, who thought it was possible as I could have contracted it in school. However, they decided to seek a second opinion from a different hospital. They took me to Doctors Plaza Nsambya in Kampala, where I was eventually diagnosed with active dermatomyositis. The doctors said that my immunity was way too high and would resort to fighting my muscle tissues.

I am the only one with this condition in my family, and I was the second recorded case in Uganda. As such, it was a new disease to many doctors in the hospitals I sought medical attention. There were no specialists trained to treat the disease, and I largely became a medical experiment. The doctors put me on drugs to lower my immunity and ease my pain.

The doctors prescribed prednisone to me, a glucocorticoid medication used to suppress high immunity and reduce inflammation. I used it intending to regain my pigmentation, but that failed. After using the drug for a long time, I began to experience severe side effects. I lost weight drastically, and my skin discoloured further. I was then advised to drop prednisone to avoid further side effects.

READ ALSO  The pain of growing up without a father

All this while, my parents were offering me extended medical care at home. They also monitored me closely to observe any changes or improvements in my condition. However, being under the full care of my parents, and doing little by myself necessitated that my mother skip work for many days to take me to the hospital. At the time, she was a teacher of nutrition and fine arts at Jinja Secondary School. She lost her job for spending a lot of time away from work. My father remained the only breadwinner at home.

During our excursions to the hospital, I encountered discrimination first-hand. The taxi and boda boda operators would refuse to ferry us, as they believed, wrongly, that my condition was infectious. Looking back, I think it is understandable as my situation was still very strange to many people. However, I still believe that their failure to understand my condition can be excused as a reason to discriminate against me.

These encounters where people seemed to shun me publicly made me aware of what it meant to be wanted or accepted by others and what it meant to be rejected. I heard ruthless words uttered to me at a very early age. The unkind words stuck with me and only encouraged me over time, and made me more confident and self-aware. I learnt that I could still live among people who chose to exclude me from their social circles for their own reasons that had nothing to do with me. I understood that discrimination was a problem outside of myself and did not need to guilt-trip myself for experiencing it.

Although I was in and out of school, I did not lag with schoolwork, thanks to my supportive parents. They always ensured that I had all the resources I needed to stay competitive at school. They also helped me feel appreciated, something that emboldened me even as I faced challenges in interacting with other students.

Other children treated me with an assumed air of indifference at school, and so did some teachers. It became hard to interact with other pupils as I would earlier before falling sick. I figured they could hardly understand what had happened to me. Neither did I have an answer to that nor an understanding of what was happening to my skin at the time. I felt broken, and at the same time, challenged to compete and define my space amongst them.

It was not an easy experience during exam time. I would constantly blackout during exam time and leave the room before completing my exam. Still, sitting for too long became brutal as calcinosis, where an abnormal collection of calcium salts under my skin would take place.

Many students did not disguise their hatred for me. They insulted me and branded me undesirable tags. Some would call me ugly and say that I was contagious right into my ears. I was overwhelmed by emotions and began considering suicide as a solution to end the tribulations I was facing.

However, I considered turning the negative energy I was receiving into positive energy to build myself. I figured I could not go far if I let negative energy from others, who did not understand me or my condition, and were unwilling to accept me to their social circles, bring me down.

Statistics show that there are three in a million people who have active dermatomyositis. Still, I’m sure in a country like Uganda, there are more people who have the condition and are not part of the statistics. Hence, I realised I could do more than just pity myself for the jibes aimed at me to help others who might be living with similar conditions and were unable to come out. I decided to build a brand, the Santalucy Initiative. I could create awareness about the condition and let people know that the condition is not contagious and can be treated.

I began making progress towards that, and I received support from my family members, the media in Uganda, and close friends who were genuine about their intentions to help me stand firm.

In 2019, I came out publicly to tell my story. I was tired of hearing people tell the story in whispers and doing so inaccurately. I established my initiative and forged the path to creating awareness. I created my social media pages, and I have gained traction. After my initial campaigns, I raised some medical fees to consult specialists in Aga Khan Hospital in Nairobi. I am forever grateful for the opportunity, as it is in Aga Khan Hospital, where I found specialists and resources necessary for my treatment.

Through the Santalucy Initiative, we have gone further to interrogate such subjects as stigma and body shaming, some of the subjects that society tends to ignore. I have been involved in various activities that have helped me to showcase my scars and create awareness regarding active dermatomyositis. I have participated in a sports show in Kampala as a model.

The opportunity allowed me to demonstrate to the people what it means to accommodate others, including those with visible scars.

I have made strides towards leading a normal life that does not entirely centre my condition. I love travelling as much as I get the opportunity to, as that helps clear my mind, expand my worldview and distances me from my worries. I also love writing, which helps me express my deepest emotions honestly. I have made a few friends with whom I interact and hangout.

I enjoy experimenting with different kinds of foods, and you will find me in eateries when the weather allows. Yes, the weather determines whether or not I get to go out. When it gets hot, my skin turns white, and I appear as if I’m boiling. It is uncomfortable and painful, so I avoid heat and especially from the sun, as much as possible. Instead, I prefer going out when the weather is chilly.

These are challenges that face people with active dermatomyositis. People have been enduring the impact of the disease, determined enough to beat the stigma associated with the disease. It would be a great gesture if people stopped judging others by their skin appearance.

My treatment is continuous and costly. I have spent Sh2.6 million on treatment costs from November 2020 to July, 2021 at Aga Khan Hospital in Nairobi. The estimated amount of money remaining for my treatment is eight million Kenya shillings. So far, most of the financial support I have received has come from well-wishers through the fundraisers I organised, mostly on social media. I have received a considerable amount of support from Kenyans, and Ugandans too, for which I am deeply indebted.

My doctors at Aga Khan have indicated that my condition can be treated fully only if I have enough resources for three surgeries I’m required to undergo. Truly, I look forward to the day when I’ll look back at my present situation as part of my history and say that, indeed, I have conquered  it.