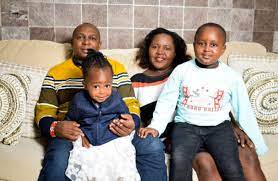 Businesswoman Sarah Kabu is now demanding an apology from her stepdaughter who allegedly took her children without her permission and went with them to the coast.

Sarah says that she is demanding an apology from the girl since according to her she is not part of her family.

She says that the 10 days without her children were traumatizing for her and at that point, nothing mattered but her getting control of her children.

The girl who is Simon Kabu’s daughter is the one who took their children to Mombasa when Sarah and Simon Kabu had relationship issues.

“I was defending my children and nothing mattered apart from having control of my children back and it took me 10 days without having control of my kids and it was traumatizing. Not everything has been ironed out because I still have not received an apology from the girl and I am still waiting for the apology. There are still other dramas happening and we do not share them,” Sarah said.

Despite getting back together, Sarah says that they are yet to resolve their issues since there are a lot of dramas happening.

“There is a lot of drama happening in the family which we do not want to discuss on social media but I know I am a strong woman and I am going to sort all the issues on social media and not rant anymore online. I am trying to be off cameras abit but it is good to be open. People were just seeing me as a jealous step mum and they were all judging me which was false,” she added.

The businesswoman has described the moments as the most difficult of her motherhood journey.

“Even the strongest women that you see if you want to shake her just touch her children. I was trending because I was defending my children. After all, I feel like children are precious and nobody should pull such a string and it was one of the most difficult phrases I was passing through in my life because I have never imagined someone going to pick my kids without my permission,” she added.

READ ALSO  Ruto: Give me 1 year to reduce unga prices
Related Topics:EntertainmentNews
Up Next

Man City ready to fork out £60m for Phillips