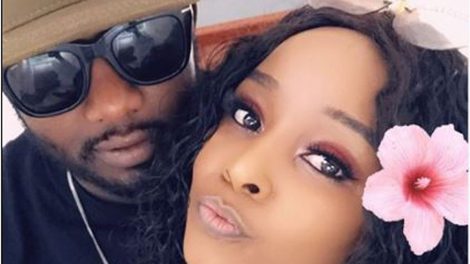 Saumu Mbuvi, the daughter of former Nairobi governor Mike Sonko, on Monday announced that she had called it quits with Lamu senator Anwar Loitiptip.

In a Q&A session on Instagram with her fans, the mother of two revealed that they parted ways due to irreconcilable differences.

“These are things he did to me,” she said, adding that in due time she will reveal the details.

The couple welcomed its first baby together on March 8 as the world was celebrating International Women’s Day.

Their daughter also shares a birthday with her elder sister and Saumu’s first child whom she sired with businessman-cum-politician Ben Gatu.

After dating for nine months, a heavily pregnant Saumu broke up with Gatu after a nasty fallout.

Saumu and Loitiptip met in Mombasa where Saumu was on holiday and he was there for work and they had been dating since 2019.

In a controversial incident in 2019, the lovebirds were attacked outside Memphis Lounge off Thika road on Madaraka Day, an incident that left the Senator hospitalised in the Intensive Care Unit (ICU).

A security guard, David Kombo, was charged at Makadara Law Courts with assaulting the senator and Saumu but he denied the charge and was freed on a cash bail of Sh30,000.

Saumu has been using her social media pages to advise women and create awareness on domestic violence by urging women to speak out and walk away if they find themselves in such situations.

Woman ‘curses’ son who threatened to kill her over Sh2 million, house