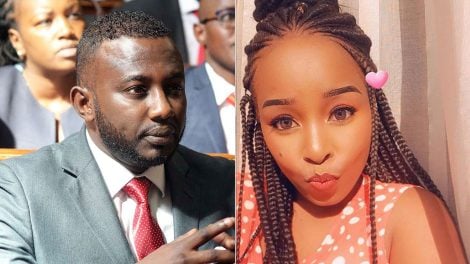 Former Nairobi Governor Mike Sonko’s daughter Saumu Mbuvi has left tongues wagging over the extent of her fall out with the father of her second-born child.

Via a social media post, the mother of two left a cryptic response to a fan who asked whether Lamu Senator Anwar Loitiptip was financially supporting his child.

She responded with a question asking the fan who his baby daddy actually was.

“Sorry who is Anwar,” she responded.

Asked by another fan in the Q&A session on Instagram whether she was dating anyone she responded that she was currently taking a break from dating other people and started focusing on herself.

“Are you dating?” asked another fan.

“I’m dating myself. I take myself out to eat, I buy myself clothes. I love me,” replied Saumu.

Loitiptip and Saumu started dating in 2019 and had a daughter in March 2020.

In June last year, Saumu shared on her Insta-story that they had even set a wedding date.

However, in February 2021, Saumu, revealed that they had separated after Loitiptip allegedly became abusive and unfaithful.

In September 2019, a 36-year-old woman claimed that the Loitiptip impregnated her and then ditched her.

The woman by the name Hanifa Were publicly came out with the claims of how she met the youthful senator through Facebook in April of that year.

While addressing journalists at the Muslims for Human Rights offices, Hanifa gave a blow-by-blow account of her short-lived clandestine affair with the youthful lawmaker.

But in his response, he dismissed the claims as a calculated ploy to tarnish his name but admitted to knowing the woman and that they parted ways after he realised their relationship was not going to work.

READ ALSO  My baby was born addicted to heroin

Saumu and Loitiptip met in Mombasa in 2019 where Saumu was on holiday and he was there for work.