Second fugitive on US most wanted list arrested in Meru 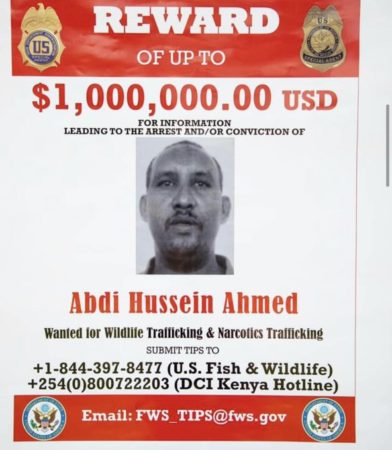 Abdi Hussein Ahmed, also known as Abu Khadi, has been apprehended by detectives from the Serious Crimes Unit. He is a suspect wanted in the US for trafficking wildlife and drugs.

The suspect was nabbed early on Tuesday morning during a raid in Maua, Meru County, where he was residing in a leased room, according to the Directorate of Criminal Investigations (DCI).

“This is after detectives received information on his whereabouts through the FichuakwaDCI anonymous hotline, 0800 722 203, and moved with speed to arrest the suspect,” said the DCI.

Ahmed is wanted in the United States after being named in an indictment alongside Moazu Kromah, alias “Ayoub,” Amara Cherif, alias “Bamba Issiaka,” and Mansur Mohamed Surur, alias “Mansour,” for taking part in a conspiracy to traffic in rhinoceros horns and elephant ivory, two protected wildlife species, both with a combined market value of more than $7 million.

In this, more than 100 elephants and 35 rhinoceros were illegally poached.

According to the DCI, a federal grand jury in the Southern District of New York charged Ahmed and his other co-conspirators with conspiracy to distribute and possess with intent to distribute one kilogram or more of heroin, which carries a mandatory minimum sentence of 10 years in prison.

This came after a joint investigation by the U.S. Fish and Wildlife Service (USFWS) and the Drug Enforcement Administration (DEA).

Ahmed apprehension comes after the capture of his accomplice Badru Abdul Aziz Saleh, alias “Badro,” on May 31, one week after the U.S. Department of State announced a $1 million reward through the Transnational Organized Crime Rewards Program (TOCRP) for information leading to Abdi Hussein Ahmed’s arrest and/or conviction for involvement in transnational organized crime.

READ ALSO  Experts Deliberate on Children's Challenges, Solutions in the Wake of COVID-19

The Complex Frauds and Cybercrime Unit of the U.S. Attorney’s Office is handling this case. The prosecution is being led by Assistant United States Attorneys Sagar K. Ravi and Jarrod L. Schaeffer.

The Kinoti-led organization praised the general public for cooperating with security organizations in the battle against crime and urged even stronger future partnerships.