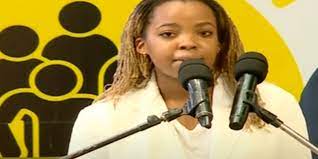 Safina Party’s Jimi Wanjigi has unveiled his family today during his endorsement to contest for presidency in August general election.

The businessman introduced his family publicly as  he declared his bid to be the Kenyan 5th president today at the Bomas of Kenya through his new banner, Safina Party.

Given a chance to speak and before bringing her father on the stage to address the national delegates conference, Wanjigi’s little daughter Wambui wanjigi praised his father as a loving father, role model and a god-fearing man.

“I would like to start by saying that one of the greatest and most important lessons my father taught my brother and I is to always believe in our dreams and pursue them with passion, a lesson in which I see him achieving every day. My father’s dedication not only to our family but to his work is one of the qualities in which I admire him the most. He has been my role model, my teacher and my best friend. I wish you well dad as you take this mantle and this quest to be the fifth president of the Republic of Kenya, it is my hope that when you ascend into office, you serve the people in true affirmation of God’s will for man and woman,” Wambui said.

“You have to excuse me as I am inexperienced with speech writing. One of the greatest lessons my father taught my brother and me is always to believe in our dreams and pursue them with passion,” Wambui added.

Wanjigi is the chief executive officer of Kwacha Group of Companies, a privately held family office with interests in various sectors of the Kenyan economy including agri-business, financial services, industrials and real estate.

He is however best known for being the key political strategist for Raila Odinga’s 2017 election campaigns and the quiet force behind Uhuru Kenyatta’s 2013 election victory.

He joined Safina Party early this month after a bitter fallout with the ODM leader Raila Odinga.