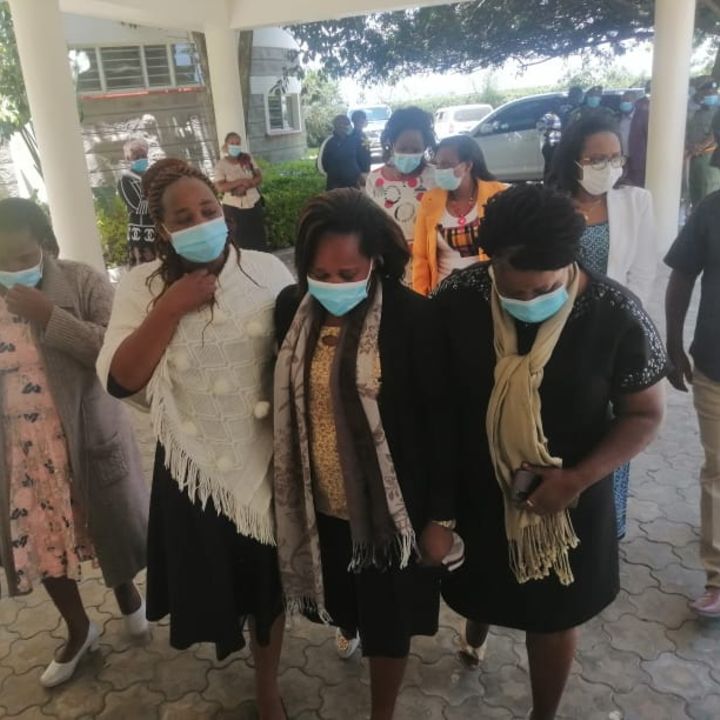 Nominated Senator Victor Prengei’s wife had alighted from the vehicle just before it crashed, killing her husband.

Catherine Prengei and her husband were travelling from their Marioshoni farm in Eastern Mau to their home in Mercy Njeri on the Nakuru-Kabarak road, but they stopped in Nakuru town and took separate vehicles.

Family sources interviewed at Umash Funeral Home in Nakuru said Ms Prengei took a different vehicle and went home ahead of her husband.

“The two were together in Nakuru town, but his wife decided to go home earlier, leaving him behind. On arriving, someone called and informed her that he had been involved in an accident and that he had been taken to War Memorial Hospital,” said Daniel Kobei, who spoke to Nation.Africa on behalf of the family.

Mr Kobei said the senator, who was driving himself, crashed in Gioto on the Nakuru-Kabarak road.

Ms Kiraguri said the vehicle was being driven at a high speed as it headed towards Kabarak. Mr Prengei lost control and veered off the road, hitting a wall on the right side of the road.

“As a result of the impact, the driver, Mr Prengei, sustained injuries and was rushed to Nakuru War Memorial Hospital but succumbed to injuries while receiving treatment,” she said.

Friends, family and leaders converged at Umash Funeral Home on Tuesday to pay their respects to the senator, who was the first-ever legislator from the Ogiek community.

READ ALSO  Why I rescue mentally ill people from the streets

His elder brother, Joseph Saitoti, said he received the news of his brother’s death with shock because he was with him the previous day.

“We had spent the better part of Sunday together at his home in Nakuru where we shared plans for our family. He also had big plans for the Ogiek community where he came from, as well as the other minority groups,” Mr Saitoti said.

Leaders took to social media to condole with his family, describing the 37-year-old senator as a hardworking leader whose vision was to ensure that young people and marginalised communities enjoyed their rights.

Deputy President William Ruto and Wiper party leader Kalonzo Musyoka led the country in mourning the death of the senator, who was nominated in 2017 by the Jubilee Party to represent the minority and marginalised group.

Dr Ruto, in his tweet, eulogised Mr Prengei as a great gentleman who was a modest yet distinguished servant with firm commitment to the advancement of the minority’s cause.

“He was progressive and full of groundbreaking thoughts that transformed the lives of many,” he said.

For his part, Speaker Kenneth Lusaka described Mr Prengei as an amiable, calm and committed lawmaker who distinguished himself as a tireless champion of minority groups.

Nakuru Governor Lee Kinyanjui mourned Mr Prengei as a quiet, humble leader who was always conscious of the huge burden he carried.

Jubilee, in an official statement from the party secretary-general Raphael Tuju

The head of minority and marginalised communities in Kenya, Amos Ole Mpaka, expressed his shock over the sudden death of the senator, who he said was their only representative in the Senate.

Mr Ole Mpaka said the death has dealt a huge blow to communities whose rights he had been fighting for.

He explained that he and Mr Prengei pushed for a bill that aims to protect the rights of special interest groups to be represented in the country’s leadership.

“This is the only leader we had in the Senate and National Assembly who had carried all our hopes. We are mourning because we have lost the only person who was representing our interest at the national level,” Mr Ole Mpaka said.

He appealed to the party leadership to ensure the position is given to a member from the same group as Mr Prengei was.

Mr Prengei was nominated by Jubilee in 2017 to represent young people in the Senate.

He was the first Ogiek community member of Parliament and was seen as a voice of the minority group in Kenyan political circles.

In 2017, he graduated with a MBA in strategic management from Jomo Kenyatta University of Agriculture and Technology.

The senator was the voice of the Ogiek community in the Senate and in courts of justice, and would voice their concerns especially on matters of land ownership, representation and culture.

Before him, the Ogiek had never had representation in Parliament since independence though they were grossly affected by their removal from their ancestral land in the Mau forest complex.

Their removal prompted them to sue at the African Court on Human and Peoples’ Rights to argue their case against the government. On May 16, 2017, after an eight-year court battle, the court in Arusha, Tanzania, ruled in their favour.

The court found that the Kenyan government had violated seven separate articles of the African Charter in a land rights case that dates back to colonial times. It also said that protecting the Mau forests could not justify the evictions of the Ogiek from their ancestral lands.

The court also recognised the Ogiek as an equally significant community with a distinct culture whose rights to property, life, culture, religion, development and natural resources should be respected as provided in the African Charter on Human and Peoples’ Rights.

Joseph Towett, chairman of the Ogiek Council of Elders, described the death of the senator as a big loss to the community, which was already starting to feel represented in national politics.

After his studies, Mr Prengei worked for the Independent Electoral and Boundaries Commission as a deputy returning officer. He later sat on the Nakuru County Land Management Board and the Betting Control and Licensing Board.