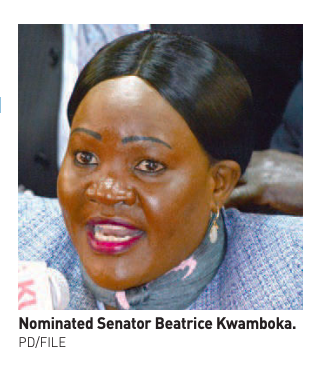 Through lawyer Danstan Omari, Kwamboka went to court to in an effort to have KQ license to fly within the country suspended pending the hearing of the suit. Senator claims that on December 6, 2020 and in preparation for the December holiday festivities, her two children and herself booked and paid a flight with KQ from Nairobi to Mombasa.

Regrettably, on the December 28, 2020 she was shocked to learn that her seat had been improperly and to her inconvenience ‘sold’ to obviously another favored client of KQ without first offering her an apology and a similar alternative. “Consequently, my children were forced to travel alone and without my company as I was left stranded at the Jomo Kenyatta International Airport for hours before I could find an alternative means of getting to Mombasa,” she claims in court documents.

Lawmaker further claims the decision to transfer or shift her from Business to Economic class and consequently offering her reserved seat to another client despite the common understanding that she had long and previously booked her seat and paid is a clear demonstration of unfair and unjust discrimination.

“The Respondent’s action of transferring me from the Business to Economic class without my participation or consultation offends my right to a fair administrative action that is fair and my right to receive in writing reasons for such an adverse action being taken against me,” she claims.

She says she failed to understand the basis of the KQ’s conspicuous acts of discrimination and bias. “Moreover, I am deeply disturbed by the callous manner in which I was treated by KQ’s employees and humiliated by being forced to travel in a class that is not commensurate to my honorable standards, lifestyle and financial ability,” she claimed.

Kwamboka claims KQ has ignored to apologise to her and reimburse the excess air fare she had paid in the hope of travelling in the Business as opposed to the Economic class despite a demand letter being forwarded to them demanding apology and compensation.

She also wants the court to order and direct KQ to file a report showing their policy on non-discrimination of its clients/customers (if any) and its guiding manual on the general protection of its customers’ rights.

Related Topics:Beatrice Kwamboka
Up Next

Tax questions to ponder in the advent of Covid-19