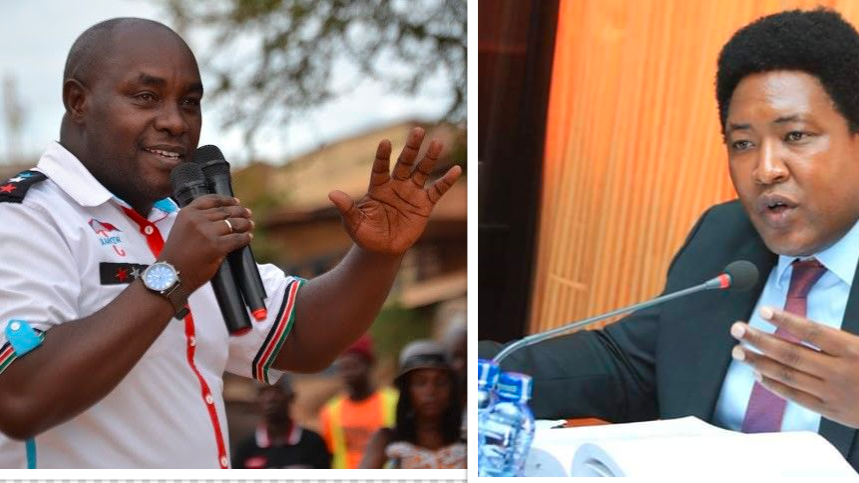 The argument, which aired on a Local TV News Night political chat show, focused on a private letter signed by ODM leader Raila Odinga, in which he conceded that the disbanded National Super Alliance (NASA) coalition owed the Wiper Party Sh87 million.

Senator Mutula Kilonzo Jr, the Wiper party’s Vice-Chairperson, cited it as the reason why Mr Kalonzo was adamant about joining forces with Mr Odinga in the 2022 presidential race.

Senator Mutula Kilonzo Jr, Wiper party Vice-Chairperson, stated that the Wiper party had only got Sh25 million of the required sum, claiming it as the basis for Mr Kalonzo’s tough position on joining forces with Mr Odinga in the 2022 presidential election.

Senator Wambua, when asked why the Wiper party’s leader chose to make the secret paper public, said Professor Makau Mutua had been given two opportunities to reveal the information and had declined.

“An opportunity had been presented to the person who was supposed to reveal the details of that argument, twice. One time in my presence, and that did not happen. Both the principals who signed the document with my party leader and the depository of the agreement are in breach of the contents of the document and so my party leader was forced to make the document public,” Wambua outlined.

The Narok Senator’s stance on the issue seemed to irritate those who saw the interview, with the majority implying that Olekina underestimated Senator Wambua’s political rhetorical prowess.

Collins Kibet, an anonymous online critic, said: “Ledama had to even insult leaders who support Kalonzo. Anyway, yesterday’s [March 1] discussion was less of facts and full of emotions”

Mr Ledama, who is a member of the Orange Party, described Kalonzo’s political strategists as “extremists.” He advised the former Vice President to disregard their advice and act on his convictions instead.

“The honorable Kalonzo Musyoka is surrounded by a group of extremists… As I know him, he is a gentleman and he cares about this country… I think Enoch and his group are holding Kalonzo – a fine gentleman – hostage and the only ransom there is their re-election… So it’s not about Kalonzo, it’s about their aim,” Senator Olekina insisted.

The leaked letter comes at a time when renegotiations are in full swing ahead of the 2022 presidential election, with Kalonzo being touted as a possible third-term running mate for former Prime Minister Odinga.

The Sh62 million deficit that Wiper argues is legitimately owed to them, according to the contents of the signed deal, is now the key to ending the stalemate.

“Raila remains a brother with whom I’ve labored within absolute good faith to bring true democratic change to our country. I am ready to work with him again, I urge that as we engage in fresh negotiations, this document forms the basis of such negotiations,” Kalonzo stated in a March 1 press address.

READ ALSO  Mike Sonko to run for Mombasa Governor, cleared by his party

With ODM luminaries like Azimio la Umoja and others going for the charm offensive with Kalonzo, the former vice president’s upcoming Sh62 million decision is one of the most carefully followed occurrences ahead of Kenya’s 2022 presidential election.