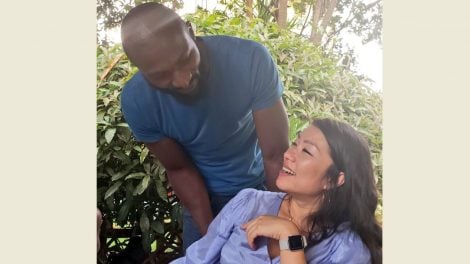 Ombachi, who is also a popular food blogger, and his girlfriend are yet to officially announce their pregnancy.

In a video clip they shared while celebrating their son’s first birthday, Svet, as she is popularly known, is seen holding their son, further showing her growing baby bump.

“My little man is not so little anymore! You’re growing up, buddy, and I am so pleased to see what a gentleman you’re becoming. You obviously take after your old man. I hope you continue being the lovely person that you are and that you never let anything change that. Wishing you all the happiness in the world on your special day today! Happy birthday!” Ombachi wrote.

The couple’s son turned one.

The player also share shared short videos capturing his son’s blue, white and gold themed birthday party which was decorated with pictures of him hanging out with his parents on various occasions since his birth.

The 30-year-old Ombachi is one of Kenya rugby’s sevens superstars in his time.

He made the squad for Kenya’s debut in the first-ever rugby sevens Olympic Games in 2016 in Rio de Janeiro, Brazil. In 2013, he was also part of the squad that competed in the Rugby World Cup Sevens in Russia.

‘He had just gotten married,’ Family of man killed at Ruaka club speak