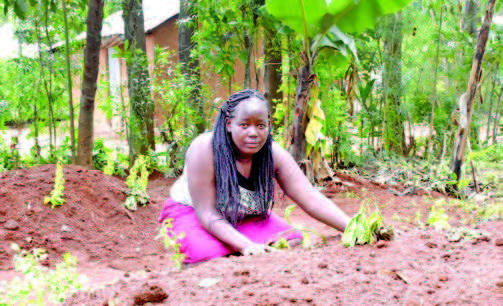 In the quiet villages of Kajulu ward in Kisumu East sub-county, Kisumu county residents are mourning the death of relatives, who have succumbed to Covid-19 related complications.

Grace Adwar, a Fourth Year student at Maseno University, is yet to come to terms with the death of her parents, suspected to have occurred from Covid-19 complications. Her mother, Leah Adwar, 36, collapsed as she headed to the toilet. She later died on the way to a nearby hospital.

Grace, the only surviving member of the family vividly recalls the events leading to the death of her parents in a span of one week. “On the fateful day of May 16, mum woke up very well and was in a jovial mood. She even asked me to make tea as we prepared for the day’s activities,” she recalls.

Prior to her death, the deceased and her husband, Isaac Adwar, 49, were admitted at St Consolata Hospital in Kajulu where doctors said they were suffering from malaria.

of confirmation of death.

Villagers said cases of Covid related deaths have risen in the area in the recent days. “The number of deaths related to Corona are unprecedented, people are dying daily and are hurriedly being buried,” said Kennedy Odero, a resident.

Sungu claimed the county and Ministry of Health Covid-19 surveillance teams failed to control the spread in the area and entire lake region, particularly when the Indian variant was reported in Kibos area.

“The authorities did not take appropriate action on the basics of public health; isolation of the people who travelled from India and those who tested positive for the India variant, immediate contact tracing, identifying and isolating contacts with workers at Kibos, cordoning off Kibos factory and environs to be able to isolate, test and treat promptly all the people infected,” he said.

Sungu continued: “Instead they allowed the disease to spread freely across the whole Kajulu and Kisumu East, which is the main catchment for Kibos factory workers.”