'She tried to bargain for her life,' woman recounts granny’s plea to killer mob 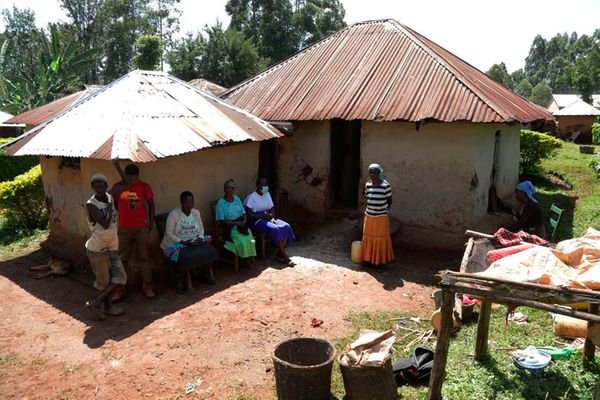 On Sunday morning, Mrs Sindege Mayaka was feeding her chickens at her homestead in Morero village, Marani sub-county, Kisii County, before preparing to go to church.

They went straight for her, pounced on her, dragged her from her house and frog-marched her to the nearby Nyagonyi Primary School playing ground, located behind the Lutheran church that she attends every Sunday.

The 83-year-old woman attempted to resist the ‘arrest’ and pleaded to be left alone, but the fierce-looking rowdy youths could hear none of her cries.

Her son, Mr Christopher Mayaka, witnessed as her mother was roughed up and tried to reason with the attackers, but was silenced by a panga cut in the rear part of his head.

He dropped down unconscious, before being rushed to a dispensary.

“I was here with my mother-in-law when they attacked. They cut my husband in the head when he tried to defend his mother,” said Ms Beatrice Chepkorir, who witnessed the death of her mother-in-law over claims that she was a witch.

She was clobbered as she was pushed to her lynching ground.

At one point, she was dragged on the ground after her frail legs could walk no more.

“She pleaded for mercy and even tried to bargain for her life with the little money she had after selling her cow so that she could go to hospital. Her cries fell on deaf ears as the youth were only baying for her blood,” Ms Chepkorir told the Nation.

Mrs Sindege paid with her blood. Her attackers also took Sh20,000 she had on her.

The dramatic events of Sunday, October 17, will remain edged in the minds of residents of Marani, Kitutu Chache North.

Mrs Sindege was among four women lynched in broad daylight. She was the fourth to be lynched in the horrendous attack.

When the Nation visited the village, the home of Mrs Jemima Mironga, 60, was deserted while relatives of Mrs Sigara Onkware, 62, declined to speak to the media.

The other homestead was that of Mrs Agnes Ototo Moraa, aged 57.

The four were accused of bewitching a 17-year-old boy and turning him into a zombie.

He allegedly looked weak, was not talking, felt cold, and was disturbed and confused.

Investigations by the Nation revealed that the Form Four student at a local secondary school had been sick for over a month.

“He had been sick. He used to be prayed for in our church, which his parents also worship,” said Ms Chepkorir.

Reports indicated that on Friday night a cross was planted on the front side of the boy’s house. Villagers interpreted it to mean that witches had visited the homestead.

The urgent assignment then became for villagers to hunt for the witches and a search began. Residents were asked to queue and a ritual was performed.

Culturally, according to residents, a bewitched person is made to lie down and each villager is made to take a Bible, place it on the ‘victim’ and whisper the word ‘heal’ as they spit saliva on his or her face.

“If the victim’s zombie status disappears during your turn on the queue, then you are responsible for bewitching,” said a villager.

Villagers said the ritual turned positive for one of the women.

It is then that the woman was forced to reveal her ‘accomplices’ before being lynched and that is how the other three women would meet their death.

Their houses were stormed before the women were frog-marched out of their homesteads and their property vandalised.

The claims of witchcraft were not confirmed and the alleged witchcraft suspects were not interrogated. It was all about instant and cruel justice.

But the women’s families say they were innocent and were just victims of circumstances.

The Nation was still trying to find and interview the ‘bewitched’ boy by publication time.

Notably, all the four victims are from poor backgrounds but have sizable pieces of land.

Three of them are widows. The Nation could not confirm the marriage status of one of the victims, because her family fled the homestead after the attack.

At the home of Mrs Moraa, the cries of innocence are the same.

Relatives of the deceased woman say there was a history of land conflict with a neighbour.

“My father was murdered last month. He was stabbed to death by unknown people. His grave is still fresh. They have now come for our mother,” said Ms Lydia Ototo, a daughter of the deceased woman.

Ms Lydia says that her mother had become sickly and was mentally challenged.

“They bewitched my mother, made her sick and now they have taken both of my parents,” she claimed.

She does not know the actual acreage of their land, but explained that the disputed part was near a river.

“A member of that family was the first to slash my mother. She begged to be spared before her death, but her killers heard none of it,” she narrated.

Kisii Governor James Ongwae, who hails from Marani, pleaded with residents not to take the law into their own hands.

“The law of the jungle is unacceptable,” the governor said, announcing that he was creating a task force to find the extent of the problem through the Culture ministry and will involve other stakeholders.

“Several people are recording statements. This is not acceptable (today). I can authoritatively say that the victims were innocent because they have no history of having committed any crime,” Mr Muriiura said.

He said police had restored calm in the affected villages and were keen to prevent retaliatory attacks.

“I held a baraza there yesterday and called for calm,” he said.

Authorities say they have no statistics on people who have been killed on suspicion of being witches.

Gender activist Esnas Nyaraba condemned the killings, saying it is shocking that most of the victims are usually elderly, widowed and poor women.

“This has nothing to do with witchcraft. Authorities and researchers should investigate this and put it to an end,” she said.

“It is just inhuman to witness our children turning against us. Mothers are supposed to enjoy the fruits of their wombs.”

A 70-year-old woman was lynched last October and three houses torched by irate members of the public in Nyabitiro village, Marani sub-county, for allegedly engaging in witchcraft.

The woman, Yobensia Kwamboka, was torched after she was reportedly found dropping leaves considered as witchcraft paraphernalia at the home of her stepson, Peter Omanga.

Some years ago, Kisii hit world headlines after five people were lynched on allegations of practising witchcraft. Over the years, several others have lost their lives in the same manner.

The child, who was allegedly bewitched, reportedly pointed out those who had abandoned him by the roadside after abducting him.

The boy’s revelation roused the community’s wrath and in a matter of minutes, five people were set on fire.

Two years ago, two women were lynched in Omokonge village, Bomabacho location in Nyamira County and their eight houses gutted.

Pauline Marinda Mogambi, 95, and her expectant daughter Mary Mogambi, 40, were beaten up before being lynched by an angry mob that accused them of being witches.

Pastor Lawrence Nyanuga, chairman of the South Kisii Pastors Fellowship, says although there is witchcraft, most of the people who are killed are innocent.

“The assailants only target the elderly in society and are out to forcefully take their land and other property,” he said.

Pastor Nyanuga, whose family was accused of practising witchcraft, says there was no evidence to support the witchcraft claims.

Some 11 people were killed in his rural village in Suneka, Kisii South, about 10 years ago.

“For the tens of people torched on claims that they practise witchcraft, none of the perpetrators have been prosecuted in court. This leaves room for more atrocities against the old,” he says.