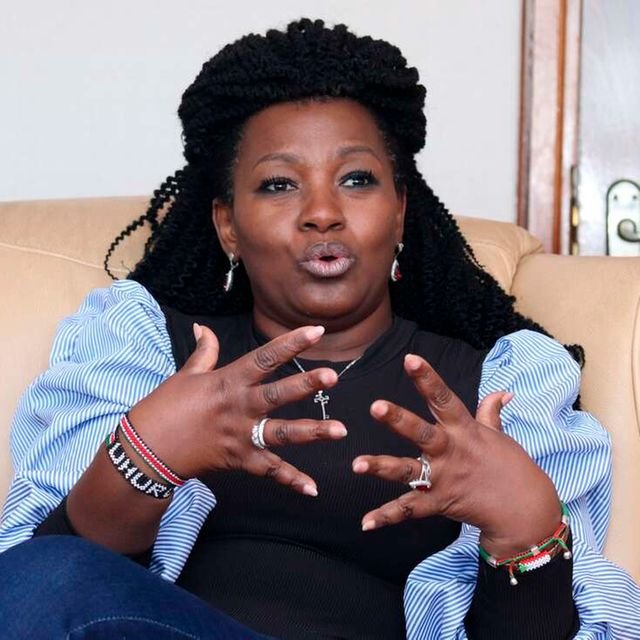 Rachel Shebesh is not the type who shies away from expressing her opinion, however controversial the subject. But for a long time, the Public Service Chief Administrative Secretary took a low profile, something that became of concern to both her supporters and friends.

This week, she opened up to the Sunday Nation about her battle with bipolar disorder and depression which almost drove her to suicide.

The former Nairobi Woman Representative revealed that she had been battling the disorder for 15 years now.

“The person who first suspected that something was amiss was my husband,” says Ms Shebesh.

A bipolar disorder is associated with episodes of mood swings ranging from depressive lows to manic highs.

“With bipolar you are very active and talkative, brilliant in ideas one second, and the next become very quiet and aloof. A normal person knows how to control their moods. When you are happy you are happy and when you are sad you are sad. But for a person with bipolar, a happy moment can become a manic moment,” she adds.

During a manic episode, ones behaviour is very different from normal behaviour. While some people are naturally more energetic than others, those experiencing mania have an abnormal level of energy, irritability, or even goal-directed behaviour.

A study conducted by the National Library of Medicine listed bipolar among major depressive disorders with nine per cent of mental health patients having one form of bipolar. Agoraphobia topped the list at 16.7 per cent, followed by pain disorder at 12.5 percent and generalised anxiety disorder at 9.3 per cent.

At the time she was diagnosed with bipolar, it was not extreme, but she had to move from one psychiatric to another in search of the one who understood her and made her feel comfortable opening up. She says such is one of the many challenges patients grapple with including shortage of psychiatrists.

“My turning point was when I sunk into depression a few years ago. I don’t think there is a feeling you can explain about depression that somebody who has not felt it would understand. The sense of sadness of depression is like having a wet blanket over you, a very heavy wet blanket that never moves, yet you are supposed to breathe and function normally,” she says.

Her condition was made worse with the fact that she was a politician, sometimes operating in a space where those around her are judgmental.

With time, she identified the triggers for her depression and bipolar disorder which she tries to avoid.

“There are people who are toxic. Normal people can deal with a toxic person within limits of normal behaviour but a person who has bipolar or any other mental health issue cannot handle toxic people, one can lose it.”

She had to quit taking alcohol for the sake of her treatment.

“When you defy the doctor’s advice, like with any disease, you’ll be sabotaging your own recovery. I had to quit alcohol to stay sane,” she reveals.

While mood episodes have the tendency of setting in out of the blue, they can also be triggered by experiences and environmental influences. Understanding and identifying bipolar disorder triggers is key to devising ways to staying stable and healthy.

Ms Shebesh, who has been using the same medication for the last six years, says prescribed medications play a key role in the treatment of mental health.

They can reduce symptoms and prevent relapses of a psychiatric disorder. However, she regrets that other than being beyond reach for majority of Kenyans, medication of mental health in Kenya is a trial and error

“Every doctor will tell you when you start your medication that you have to keep monitoring how you are responding to it, depending on how the body reacts, you eventually settle on the right treatment regime,” she says.

Ms Shebesh further says the medication will not work if you keep putting yourself in a situation that triggers your condition.

“There are things you can do beyond medication, there is psychotherapy. It might take time to find one but when you do, you will feel your feet,” she adds.

During her psychotherapy session, Ms Shebesh was equipped with tools to control her condition. She regularly attends the sessions.

She advises people with mental health to take time alone and process what is going on in their lives.

“When you are not accepting your family with mental health issues to take time alone, you are driving them to a place where they will not be able to come out. Sometimes they need time alone to process what’s happening in their lives before they can operate in groups,” she adds.

She says cyber-bullying almost saw her lose it. Without getting into the details of the subject, she says the day she was the subject of all manner of online ridicule, she experienced the worst downtime that almost saw her take away her life.

In 2013, Ms Shebesh got into an altercation with then Governor Evans Kidero. In the video, Dr Kidero was seen slapping her accusing her of storming into City Hall in the company of her supporters. The matter was later settled out of court.

Cyber bullies can be vicious, they even forced President Uhuru Kenyatta to de-activate his social media accounts because of constant trolling.

Ms Shebesh adds that to protect herself from online aggression, one of the triggers of her bipolar, she doesn’t read comments on posts she makes in the social media.

“I post updates but I don’t read the reactions or feedback, some followers can be so mean,” she says.

Sometimes the side effects of the drugs is extreme, she narrates.

“There was a time I added so much weight as a result of lithium treatment. Under such, you hate yourself or your self-esteem goes. Then there are certain drugs that when you take at night, you have to take another set the next morning to deal with the side effects, it is not easy.”

Ms Shebesh is lucky to have a medical cover that caters for her treatment, however the treatment of mental health in Kenya is expensive for majority.

Mental health in Kenya is underfunded, forcing most of those suffering from it to seek private treatment which is costly. In cases where they cannot afford, they are condemned to suffer the effects of mental illness.

“As a country, we need to bring down the cost of treating mental health to the level of other illnesses. Affordable mental health treatment will reduce the number of suicides in this country,” she says.

She says there are many cases of patients who have come out of Mathari National Teaching and Referral Hospital and got rehabilitated back into the society to engage in productive lives.

Ms Shebesh has taken upon herself to sensitise Kenyans about mental health and the stigma that comes with it. She further wants to push and have regulations in place to have the government regulate the medication for mental health treatment.

“The problem is not law, we have enough legislation in this country, the problem is implementation,” she says.

With Covid-19 pandemic and hard economic times, mental health cases have spiked in the country. Usually, mental disorders are characterised by a combination of abnormal thoughts, emotions, behaviour and relationships with others.

A recent report by the Kenyan Mental Health Taskforce estimates that one in every 10 people suffer from a common mental disorder. The number increases to one in every four people among patients attending routine outpatient services.

Depression and anxiety disorders are the leading mental illnesses diagnosed in Kenya, followed by substance use disorders, it notes.

Separately, a 2017 WHO report ranked Kenya at number six in Africa on depression levels. The report estimated that 4.4 per cent of Kenya’s population — 1,952,981 people — suffered from depression in 2015. More than half of those who commit suicide are under the age of 45, the report said.

When the Ministry of Health launched the Kenya Mental Health Policy 2015-2030, it stated that one in every four Kenyans will suffer from a mental disorder in their lifetime.

Sadly, in Kenya, as at 2016, there were only 88 psychiatrists – most of them located in Nairobi.

Related Topics:NewsRachel Shebesh
Up Next

Man marries primary class prefect who once reported him for noisemaking