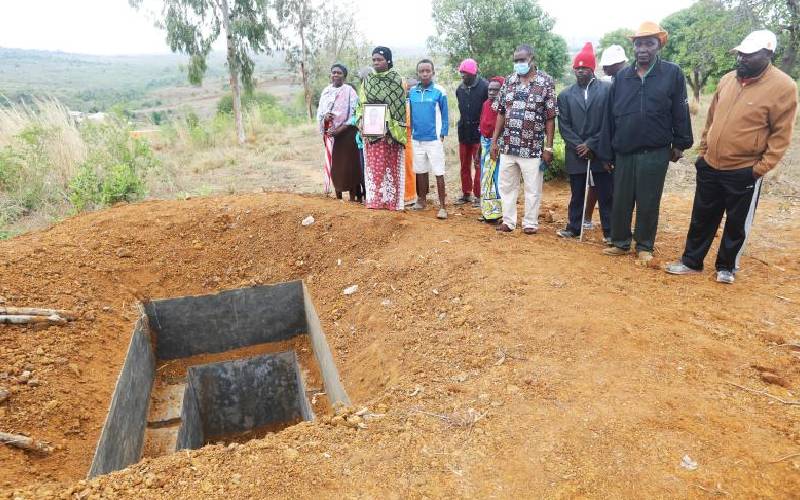 A former police officer on Wednesday broke down after finding the grave of his late wife open and her body missing.

Daniel Lwambi Chiro expressed shock at the manner in which the body of Fatma Mwero disappeared from the graveyard on Monday night.

“This is where I laid my wife to wait for resurrection when Jesus comes back but to my surprise, it was stolen before the coming of the Lord,” Chiro said.

“I do not know where I will get the body of my wife. This is an abomination. How can you steal the body of a defenseless person who is waiting for Lord’s trumpet to rise from the dead,” he cried.

Chiro told The Standard that he got the sad news about the exhumation of the body of his wife from the area Chief Antony Njao.

“I got shocked when I went to the grave and confirmed the body in the coffin was not there. The tomb was open and empty. The soil was left lying out of the grave. I do not know where they took the body,” he narrated.

A spot check by The Standard found that the cross and flowers which were placed on the grave were left three metres from the grave.

“This is very sad as it is the first case in the region hearing about a body being stolen from its resting place,” overwhelmed Chiro lamented.

The widower said Fatma was buried at the site where he has instructed his children to be laid when he passes on.

“This is where I started living since my childhood despite living in another place about a kilometre away and it is where I want to be buried,” he said.

Chiro said although he was a staunch Christian to believe the Miji Kenda tradition if the body is not found he will bury a trunk of banana and cap it with prayers and ask God to punish the people who committed the abominable act.

The area Assistant Chief Bonfice Tsumah told The Standard that he got the news about the open grave from a herds boy.

“I rushed to the place after the news and went to Mazeras Police station where I reported the matter before the police accompanied me to the graveyard,” said Tsumah.

“It is true the family of Fatma Mwero reported about the exhumation of the body from where it had been buried,” said Abuga.

He said preliminary reports indicate the family buried the body on the land despite having been stopped by the court.

Abuga said they had received leads on the whereabouts of the perpetrators and would pursue them.

“Although we are yet to establish where the body has been taken to, we are making some progress in the investigation which might lead to the arrest of the culprits. We are piecing together the information we have and I know we will get to the bottom of the matter before the end of the day,” said Abuga.

The police boss said Fatma was buried just a small distance from the home where the widower and his family are staying.

The said land located about two kilometres from Bonje along Mazera –Mombasa highway is in a dispute over ownership.

Abuga said he was aware the widower and another man have been having a dragging land dispute in the courts which has not been concluded.

“What I know is that before the burial of body on February 22, 2021, there was a court order which was addressed to the family stopping them from burying the body in the place,” said Abuga.

The police boss said since the order did not instruct the police to stop the burial, they only escorted whoever served the family with the order.

He said, as a result, some family members opposed the burial of the body in the place and walked away before the burial took place.

My job was to kick out Ruto allies, I’m happy they’re in UDA- Murathe says