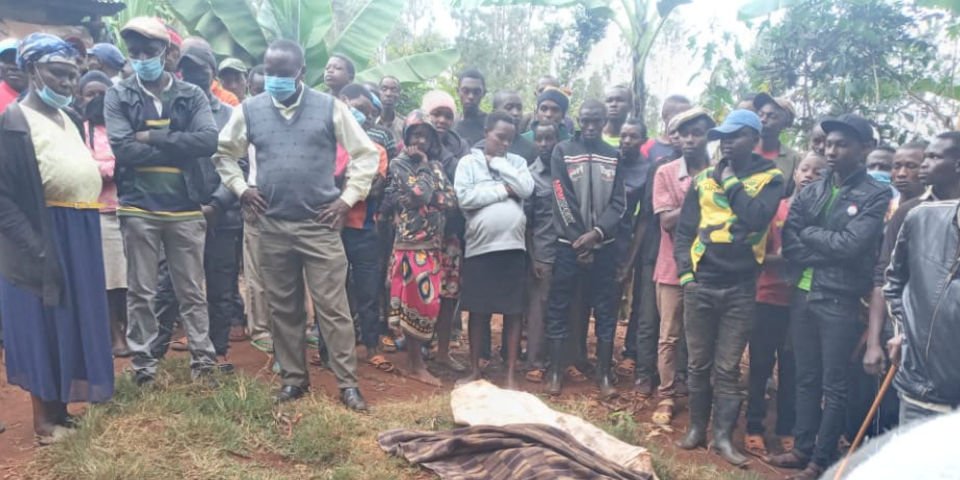 Police in Kandara, Murang’a County have arrested a 65-year-old woman suspected of beheading her 99-year-old husband.

Police say Margaret Wanjiru, who was married to Ndung’u Mugachia for 52 years, allegedly murdered him by first cutting off his right ear and then slitting his throat.

“She has been in and out of this marriage. For the 52 years that they have been man and wife under customary law, they have lived together for about 15 years,” said Mr Dunson Ngigi, Mugachia’s younger brother.

He said that the two had been living a life of conflict, “regarding the paternity of children, family land and suspicions of infidelity”.

Mr Ngigi claimed the murder suspect was against her husband being given money or food.

“There was a time in 2019 when we contemplated taking him to a rescue home for the elderly but she threatened us with all manner of repercussions,” said Marion Nduta, a grandchild in the family.

The stormy relationship ended tragically on Sunday at 7.30am in Ndururumo village when the two clashed.

“Preliminary investigations indicate that the suspect was quarrelling her daughter-in-law who had given the deceased breakfast. The husband came out to defend the daughter-in-law and that is when hell break loose,” Kandara police boss Catherine Ringera said.

The wife is reported to have broken into a verbal rage and ran for a machete that she used to fatally harm her husband.

By the time those present intervened, the man lay dead with a slit throat and the right ear chopped off. He also had a deep cut in the right arm.

READ ALSO  MP to Daddy Owen: Move on from your ex

Among those police investigators quizzed was the daughter-in-law, Betty Mumbi, who had quarrelled with the suspect.

“I was too shocked to even scream. I have never seen my mother-in-law in such a rage; she was not herself. I passed out when I saw her sink the machete into my father’s neck,” she told investigators.

“Meanwhile, the suspect is in our custody waiting for investigations to be concluded and [we will] arraign her to answer to murder charges,” Ms Ringera said.

“We are alarmed that the society has become very violent in dispute management. It is not right and we are missing the point. Spilling blood is not a solution. We should embrace peace in all our engagements,” she added.