On Tuesday, August 9, Dennis Ombogo had wanted to get up early, cast his ballot, and be at his mechanic work by 7:00am without any incident.

Instead, Ombogo, who is now widely recognized as the “sina maoni” man, got himself trending for merely having no opinion during a live broadcast on Citizen TV.

The father of one admitted in an exclusive interview with a local media that many individuals called him following the elections, but he insisted that his ‘personal life has not been affected in any way’.

Ombogo, a Kisii County native, dropped out of school after taking the Kenya Certificate of Primary Education (KCPE) because he had no money for school fees and soon after began working odd jobs.

“I did not attend high school. I joined jua kali early. I did not join because we lacked the money. I am the fifth born in a family of 8. Only one sibling got to Form Four and he is set to sit his exams this year.”

“I started out in mjengo (construction work) in 2010 in Kisii. I have also worked as a handy man at a homestead. I loved mechanic and I found someone who brought me to Eldoret where I started this job,” he stated. 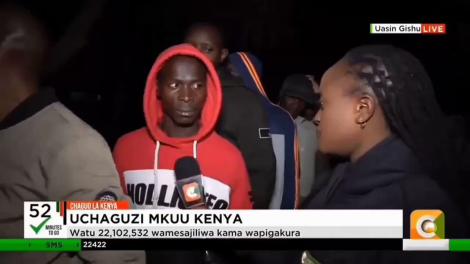 He started working as a mechanic at the Eldoret workshop in 2014, and the owner gave him a brief training before hiring him on a full time basis.

He currently earns an average salary of Ksh 2,000 in his day job, but he is hoping to get a better offer from the next president or his local MP, Oscar Sudi of the Kapseret constituency.

“I work at a mechanic shop in Eldoret and I have a very good relationship with my boss. I work daily and make average of Ksh2,000 but it fluctuates.

“I would like the president-elect to give me a job. I can’t choose a job I want but will do whatever I find. I can even do casual job,” Ombogo responded when asked if he had a message for the incoming head of state.

In terms of formal learning, Ombogo stated that he hopes to save enough money to re-enroll in a polytechnic to further his education.

In the general election of 2022, Ombogo is considered to be the most popular meme.