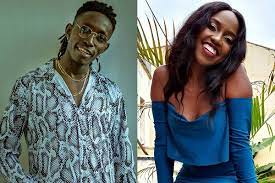 Bensoul, a singer, has expressed guilt for cheating on his fiancée with some other lady, which resulted in a pregnancy.

Bensoul, who is most renowned for his hit song, Lucy, among others says he regrets his blunder.

“I was about to make the story public but I guess you beat me to it. If you need any more information, ask me,” he told Obare.

“My girlfriend didn’t take it easy either. It really took a toll on her but I am grateful that she’s a very understanding person and caring at the same time. She’s my life partner and she put us first even amidst all this chaos,” he stated.

Noni Gathoni, Bensoul’s girlfriend, is aware of this issue and is upset by the revelation, according to Bensoul.

Noni expressed her displeasure with the scenario a few hours after the singer admitted to the blogger, saying she’s having trouble absorbing the news.

READ ALSO  Actress ‘Njambi’ of the real Househelps of Kawangware opens up on battling depression, mental illness
Related Topics:BensoulCheatingEdgar ObareMombasaNewsNoni Gathoni
Up Next