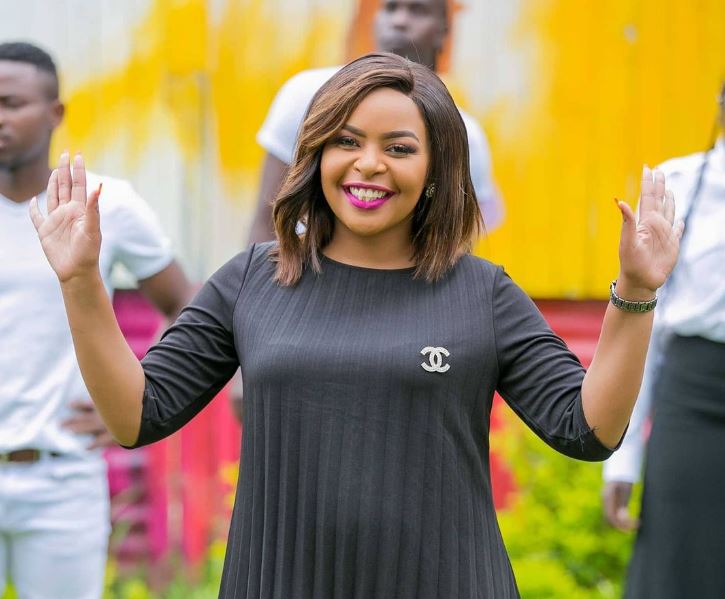 DJ Mo and Size 8 are expecting their third-born child.

Speaking to Mpasho.co.ke, the mother of two said her pregnancy was unplanned.

“One of my sisters is very prayerful. One day she had visited me then she heard a voice of God telling her to tell me to prepare for another baby. I knew I was not ready to give birth again after the struggles I went through with my first two children,” she said.

Size 8 explained that after a week or so, she talked to another prophet of God who gave her a similar message.

“He said he had seen a vision of another baby in your sitting room. She told me to prepare for another baby. After a few days, my brother-in-law came and said, that next year a time like this, there will be another baby here and not My son Junior.”

She secretly went and did a pregnancy test.

“I learnt I was pregnant. I was in shock as it was a completely unplanned pregnancy,” she said.

Her worry was how her husband would react to the news as they both had agreed they were done having more kids.

“We had already decided we were not getting another baby. I didn’t know how he would react and I was expecting the worst from him. I even told my doctor not to tell him anything. After I went home, I decided to tell him via a text message.”

To her surprise, DJ Mo sent her back a congratulatory message with a heart emoji and a smile.

“I did not know what that was, he sent my sisters to bring me flowers. In the evening he came and we discussed it and he was happy.

Size 8 and DJ Mo have two kids together. The couple also lost a baby through a miscarriage in 2019.

In an interview with Word Is, Size 8 said the last pregnancy was a life-threatening one that endangered both her and the baby.

With her recent pregnancy, she said has not had a lot of problems and her pressure has been okay.

“The only time, I experienced a few problems was when I shooting my song with Willy Paul. I was rushed to the hospital and went back home. I can say I am enjoying this space right now.”

Watch the video below;