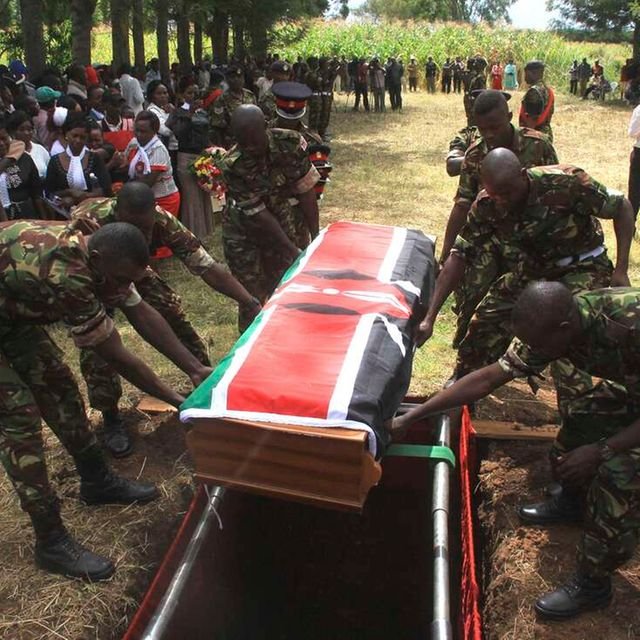 Somali security agencies were privy to a build-up of Al-Shabaab fighters around El Adde, prior to a terror attack on a Kenya military camp that left 150 soldiers dead five years ago.

And as the militia overran the Kenya Defence Forces (KDF) camp, the lack of a secure African Union Mission to Somalia (Amisom) communications system prevented besieged Kenyan troops from seeking reinforcements from the closest contingent of the regional peacekeeping force in Somalia.

Instead, KDF soldiers braved firepower from hundreds of al-Shabaab gunmen, who had blasted their way into the camp on the dawn of January 15, 2016, using two vehicles laden with between 30 and 50 kg of explosives, as they waited for assistance from their colleagues in Kenya.

The two vehicle-borne improvised explosive devices were detonated, the first at the main gate and the second at the centre of the Amisom forward operating base near the border with Kenya in the Gedo region “before hundreds of militants overran the camp with relatively little resistance from the Kenyan troops”.

By the time their colleagues based inside Kenya arrived, it was “far too late to assist”, says a report by a team appointed by the United Nations Security Council (UNSC) in 2014.

“While the Government of Kenya is yet to release official casualty figures, the Monitoring Group believes that some 150 Kenyan soldiers were killed during the attack, making it the largest military defeat in Kenyan history,” the report states, based on media accounts and a monitoring group interview on March 17, 2016 with a security expert and witness to the aftermath of the attack.

“In addition, at least 11 soldiers were captured alive and subsequently held hostage in two separate groups by al-Shabaab in Middle Juba. Since their abduction, the (Monitoring) Group has received information concerning the changing whereabouts and status of the captives, which it has shared with the Kenyan authorities through an intermediary.”

The details of the bloody mission are contained in documents Kenya filed at the International Court of Justice (ICJ) to show the disastrous consequences of terrorism bred inside Somalia, which is claiming a part of Kenya’s coastline along the Indian Ocean.

The accounts in the report of the Monitoring Group on Somalia and Eritrea submitted to the UNSC in October 2016 exposes the blunders that led to the tragedy.

Unreliable intelligence, a hostile local community, weak positions in the military installation and a broken Amisom system all conspired to disadvantage the Kenyan troops.

The lack of effective intelligence gathering and the absence of engagement with local communities on the part of Amisom both contributed to the effectiveness of the attack, says the report.

But an even more worrying revelation is that the Somali security team was aware of a looming attack that targeted Kenyans, who had moved into Somalia to combat the al-Shabaab militia, which also posed a danger to the administration in Mogadishu.

“Somali security sources told the Monitoring Group that they had been aware of a concentration of al-Shabaab fighters around El Adde – although the precise target was unknown – and they had conveyed the information to their Kenyan interlocutors. Following the attack, however, the Kenyan forces denied that they had been forewarned,” the report says.

Adding to the lack of community engagement was the perception by the locally dominant Marehan clan that the Kenyan military was actively supporting the rival Ogaden clan.

“While the video depicted a highly uncoordinated and tactically unsound assault on the part of al-Shabaab, the Kenyan forces also failed to implement basic defensive measures, such as constructing fortified barriers at the entrance to the camp and neglecting to man machine-gun and mortar emplacements,” the report notes.

And as the assault unfolded, it would expose yet another weakness of the Amisom mission – inability to quickly call for reinforcements in case of an attack.

“The attack highlighted the lack of coordination between countries contributing troops to Amisom and the fractured nature of the Amisom command and control mechanism. Even though the closest Amisom reinforcements to El Adde were stationed in Busaar, at a base to the south-west garrisoned by Ethiopian troops, the lack of a secure Amisom communications system prevented the Kenyan troops from contacting their Ethiopian counterparts for assistance. Instead, the closest military personnel to respond were Kenyan troops based inside Kenya, who arrived far too late to assist,” the report reveals.

A security source on the ground in the aftermath of the attack told the Monitoring Group on March 17, 2016 that vehicles rigged with explosives had been delivered by “soft-skin vehicles and not by armoured vehicles as had been widely reported in the media”.

Another potential attack on Amisom forces was deterred on March 5, 2016.

A United States aerial strike on an al-Shabaab training camp in Raaso, 120 km north of Mogadishu, eliminated at least 150 militants, making it the deadliest drone strike in United States history.

According to a Pentagon spokesperson, the strike had targeted an al-Shabaab graduation ceremony, adding that the fighters had been scheduled to depart the camp and “posed an imminent threat to US and Amisom forces” in Somalia.

On February 1, 2018, a 2003 Mitsubishi Airtrek registration number KBM 200D left Nairobi, crossed into Somalia at El Wak on February 4 and arrived in El Adde on February 5.

It was in El Adde where it was rigged with explosives until February 13. The vehicle was intercepted by Kenyan police on its way back at Merti in Isiolo on February 15, 2018.

When police officers approached the vehicle, an occupant shot at them. The security forces fired back, killing Mbarak Abdi Huka a.k.a. Sa’ad. Two suspects were arrested and two others escaped.

The vehicle had been converted into a vehicle-borne improvised explosive device (VBIED) containing approximately 100 kg of explosives.

All this for nothing? Frustrated actress Maria talks about educated kids who are jobless