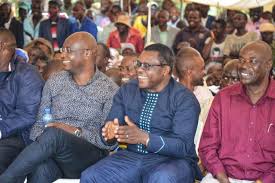 As August 9th polls approach, tension continues to rise as the rift between Ford Kenya and sister parties intensifies.

Kenya Kwanza leaders from Mt.Elgon have for a long time had a misunderstanding with UDA members blaming Ford Kenya party leader and aspirants of discrimination.

According to UDA members led by incumbent MP Fred Kapondi, Ford Kenya has been masquerading as Kenya Kwanza to gather masses in their rallies.

“Not only do Ford Kenya members use the coalition’s name to attract crowds but they also use DP Ruto’s name in place of their leader Wetangula,” Kapondi decried.

The legislator further called upon Wetangula to respect him and cease camping in his backyard without prior notice then later claim that the MP was not around to welcome them.

“Wetangula should respect me as a principal in Mt.Elgon and he should be warned that sabaot people can never be dictated since they have a well-structured leadership they rely on for political and societal direction,” Kapondi declared.

Senate Speaker Kenneth Lusaka in response challenged all parties under Kenya Kwanza to unite and set aside their differences to realize their dream of bringing forth the 5th President of the country.

“We are equal in this coalition and undoubtedly need each other, if ignored, this rivalry will divide Ruto’s votes in the mountain and it will not only be unfortunate but shameful,” Lusaka noted.

His sentiments were echoed by Jennifer Mbatiany, his Deputy governor designate who also defended her appointment which is still a cause for debate among residents in the region.

“It’s high time our community accepted and embraced women’s leadership so that we can appreciate what women bring forth in the positions they have been designated,” Jennifer advised.

The soft-spoken clergy also mentioned that she was in the same DG race in 2013 but the Supreme Council of Elders wrote her off citing that it was an abomination for a woman to be the first to enter office given that devolution had just been introduced.

Evans Chemwotei, Ford Kenya MP aspirant also emphasized the fact that all parties are in Kenya Kwanza by right and they should have mutual respect to realize a win.