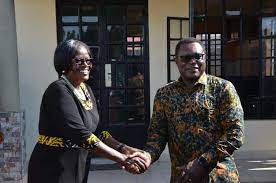 36
SHARES
ShareTweet
By Shadrack Nyakoe Senate Speaker Ken Lusaka has picked Jennifer Chemutai as running mate in his Bungoma County gubernatorial race. The announcement that was well received especially by women in the region, however, brought a lot of tension and controversy to Mt.Elgon. Though Lusaka had promised Mt.Elgon people that he would choose a Sabaot to deputize him, his choice seemed not to be satisfactory to the community at large. Though the absence of former deputy governor Hillary Chemoywo at the press conference raised eyebrows, the principal said that he had no objection to his former boss’ decision. Nicholas Kiboi, one of the candidates present at the event congratulated Jennifer on her appointment and promised to be part of the vigorous campaign, especially in Mt.Elgon ahead of the 9th August elections. Chemoywoy’s supporters on the other hand later held a press conference expressing their utmost dissatisfaction with Lusaka’s choice stating that he did not keep his promise to his former deputy. Speaking with the Press, Erick Yasin, a political activist from Kaptama said that it is disgraceful to the Sabaot community that Lusaka could not honor the will of the Supreme Council. “During the meeting with Sabaot  Supreme Council of Elders, Hillary was ordained as the chosen deputy governor to be and Lusaka pledged to once again appoint him owing to their good rapport and working relation,” Yasin explained. On the other hand, it was an extreme joy to not only the women of Mt.Elgon but Bungoma county at large.
READ ALSO  Bosom buddies die together in road crash
Bungoma Women Kenya Kwanza team also congratulated Jennifer and applauded Lusaka’s decision for giving a woman such a powerful seat in the county. In her acceptance speech, Jennifer humbly accepted her appointment and confirmed she is equal to the task even though she doesn’t boast of being the best among the other 7 candidates.

“With utmost humility, I accept this opportunity to serve the people of Bungoma county and as a clergy, I’ll be guided by God to lead people while preaching peace and tolerance as well as maintaining inclusivity,” Jennifer affirmed.

She also promised to work closely with the other candidates to ensure Lusaka garners majority votes not only in the mountain but in the whole county. Jennifer conclusively urged men to be supportive of their wives and sisters who have leadership qualities and political ambition so that they can realize their dream and come out to fully serve the nation.

“Thanks to my husband for being understanding and utmost supportive in my journey as a clergy and even now as a leader, it is a very respectful and honorable act that should be emulated with other men countrywide,” Jennifer reiterated.

Lusaka acknowledged his decision and said that his decision was deliberate so that he could keep his promise of women empowerment and the third gender rule that he is so passionate about.

“It was deliberate to have Jennifer deputize me so that I could give women a powerful seat where they can make highly impactful decisions in my government,” Lusaka said.

Jane Chebet, the only woman MP aspirant in Mt.Elgon and also the first female deputy speaker in County Assembly congratulated Jennifer but challenged Lusaka to give her a position with a portfolio.

“Unlike previous years where deputy governors were given ceremonial duties, Jennifer should be appointed head either in the roads sector, education or public service,” Jane advised.


READ ALSO  Man killed by thugs while defending girlfriend in Ruiru
Related Topics:EntertainmentNews
Up Next