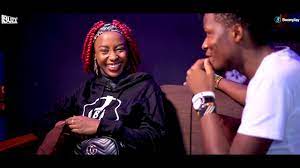 According to Ssaru, Trio is way younger than her, and that it is wrong to imply that she is dating.

“I feel bad actually because it is not true but at times everybody is entitled to their own opinion but the good thing is that it is not us making the claims so it is best to just let people talk,” Ssaru stated in an interview.

Ssaru clarifies that Trio is like a brother and that they have established a good working relationship and that Kenyans like to assume things based on how the two artists relate with each other while working.

Rapper Ssaru is among the pioneers who came up during the Gengetone wave giving fans what they had been missing.

Her unique sense of style and vibe contributed to her success in the industry and just like that – Ssaru was making money left right and center.

According to Ssaru, having artists suffer financially is not something new. It is a problem that has been there for years, and the reason new age artists are inheriting it; is because they never take time to learn from the mistakes made by fellow artists in the past.