‘Stella’ had her time but he is all mine now, says Freshley Mwamburi’s wife 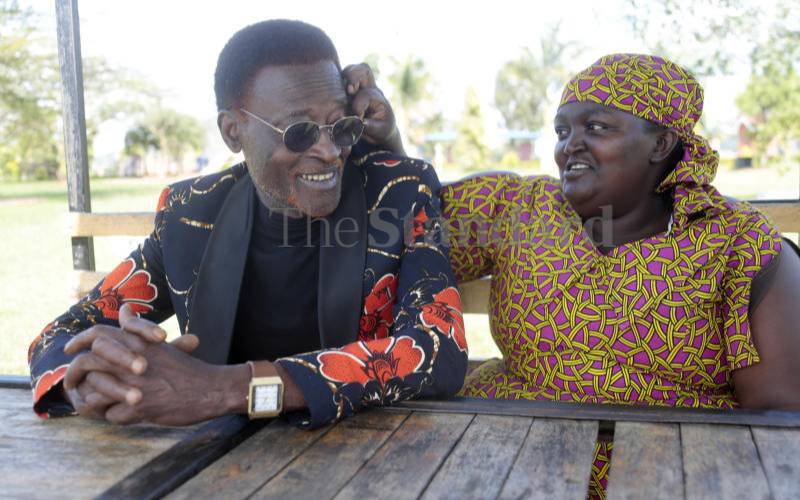 Monday was May 17, the so-called anniversary of Stella’s return from Japan to Kenya. Social media was abuzz with mentions of #Stella and how she ‘ate’ Freshley Mwamburi’s airfare.

In Machakos, Mwamburi was all dressed up for the occasion. He was in a celebratory mood, a far cry from 29 years ago when he was distraught, wanting to “cry in languages he didn’t know”.

And to ‘soothe’ the almost three-decade-old wound, Kenya Airways yesterday flew the singer of the popular song Stella Wangu for a holiday in Mombasa with the love of his life Dorcas, who came after Stella.

When we met the couple on Monday, the day Kenyans have christened Stella Day, his phone kept ringing, with media houses and fans fighting for a piece of him. A young woman comes up to him: “Hello? Are you Freshly Mwamburi? Some girls who want to take a picture with you.”

“On May 17, yes,” says Dorcas, as Mwamburi picks another call. “Last night they kept calling. I had to ask him to switch off the phone at 3am.”

So was this Stella still causing furore years later a real person? The couple maintains that she was. When Mwamburi met Stella, he says, she was 16 years old and he was in his twenties.

She studied in a college next to his place of work and they dated for a while. As the song goes, she got the opportunity to go to Japan. Mwamburi funded her trip and her stay there, only for her to show up in Kenya with a four-foot-tall Japanese man and their baby.

So now the boy must have grown to a man in his late 20s or early 30s. Is he on social media? Mwamburi seems uncertain.

What about Stella? Is she on social media? Can we talk to her?

“She is on social media, but it is very hard to talk to her. BBC tried to talk to her and I called her and she refused. She is someone else’s wife now. We have to respect that,” he says.

The artiste has done a remix of the song, which also doesn’t have Stella’s side of the story. “You know, I have my side of the story. It is like a meal and it works with what I have. I already have the ingredients for the original song, so I had to use those,” he says.

Besides, he got over it and does not blame her. “That is how it was supposed to be. I cannot be angry. Even if it was me who had gone to another country and found someone else, wouldn’t I have done the same? Life has to go on,” he says.

Even Stella was happy to hear the song, he says, so there are no hard feelings.

Exit Stella, enters Dorcas. They have been married for 21 years and have five children. He says she has had the most influence in his life.

“Unajisikiaje? Unajisikia peremende ya toffee? Au nyama choma?” he jokes while holding her in his arms as they take pictures.

“Najisikia ya Stella,” she says bashfully and they burst into laughter.

She does not mind the hype around Stella, and says she met her and that they are on good terms.

“She held the position for a while, but it was supposed to be mine and I am here now!” she says.

Mwamburi is set to release a song with Otile Brown. With 58 unreleased songs, he is not going anywhere anytime soon.