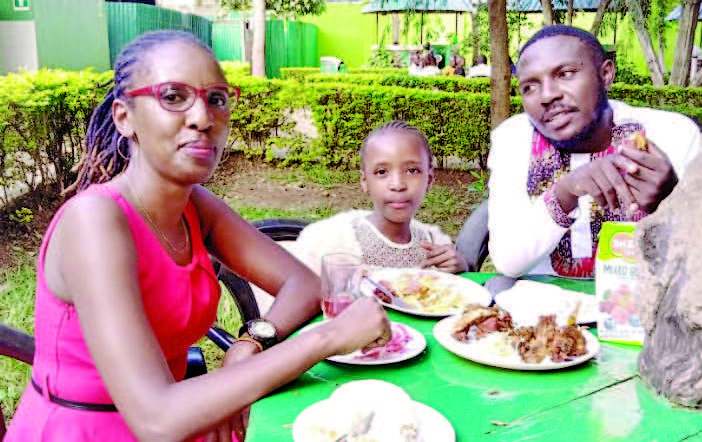 There are men who sire children and never look back. The deadbeat fathers who don’t take responsibility of their children. Well, after the bad and the ugly, let’s call it kissing too many frogs, Prince Charming comes along and puts the crown where it belongs. This is the story of Veronica Karambu Munyua.

On her final year of study at Kenyatta University, Nairobi, she conceived her daughter. What she had thought was love turned sour when her then boyfriend travelled abroad in search of greener pastures. She was only three months pregnant. Being a single mum was not a walk in the park, especially being jobless.

“My baby was born on the same day I graduated from university in July 2013. I was alone and jobless and things were hard, but I had no choice but to struggle through. All this time there was no communication from the father of my child. I got a good job in 2017 as a teacher, in Meru and that is when things started looking up,” shares the mother of one.

Guardian angel
In 2018, she met Erick Munyua at one of teachers’ events and a friendship was struck. Erick also got an opportunity to meet Veronica’s daughter, Angel, and a strong bond of friendship came to life. In 2019, he asked Veronica to marry her.

“He definitely did not mind that I was a mum. I asked him about the baby and he said he loved her so much. And that’s how we have been a family. He is the best. He takes care of all of her needs. Even his extended family has accepted baby Angel as his own.

“For Angel, this is the only father she knows and that’s it. She met her biological father when she was a year old. He had visited our home to see the child and left never to be heard from again. Erick is her only father,” Veronica shares.

For Erick, loving a woman who has a child starts from loving the child — this is the whole package. It was not such a big deal to him and it has been a beautiful journey.

“I fell in love with Veronica because she has a beautiful heart. Her child was an extension of this heart and I loved her. If you love people wholly, you accept them fully. Also, no child chooses where to be born. But they deserve to be loved fully and I am happy and grateful for what we have built over time. To Angel, I’m her dad and that is all that matters,” he says.

make you feel uneasy and unnatural around your child. Just treat him/ her as you would your own child: if you love your spouse so much, why shouldn’t you love her child?

• Be patient when waiting for your new stepchild to respond to your caring, affection, and love.

• Schedule regular times away from the children as a couple. Besides the benefits you will see as a couple, your stepchildren will take great comfort in your commitment to one another.

Related Topics:NewsVeronica Karambu Munyua
Up Next