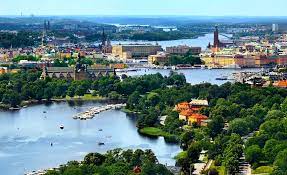 Hundreds of speakers attending Stockholm+50 have called for real commitment to urgently address global environmental concerns and for a just transition to sustainable economies that work for all people.

The two-day international meeting concluded with a statement from co-hosts Sweden and Kenya, drawn from Member States and stakeholders through the meeting’s plenaries and leadership dialogues. The statement contains several recommendations for an actionable agenda, including, among others, placing human well-being at the centre of a healthy planet and prosperity for all; recognizing and implementing the right to a clean, healthy and sustainable environment; adopting systemwide changes in the way our current economic system works, and accelerate transformations of high impact sectors.

“We believe that we have – collectively – mobilized and used the potential of this meeting. We now have a blueprint of acceleration to take further,” Sweden’s Minister for Climate and the Environment, Annika Strandhäll, said in her closing remarks. “Stockholm+50 has been a milestone on our path towards a healthy planet for all, leaving no one behind.”

Stockholm+50 featured four plenary sessions in which leaders made calls for bold environmental action to accelerate the implementation of the 2030 Agenda and the Sustainable Development Goals. Three leadership dialogues, hundreds of side events – including several youth-led sessions – and webinars, as well as series of regional multi-stakeholder consultations in the run-up to the meeting, enabled thousands of people around the world to engage in discussions and put forward their views.

“The variety of voices and bold messages that have emerged from these two days demonstrate a genuine wish to live up to the potential of this meeting and build a future for our children and grandchildren on this, our only planet,” said Keriako Tobiko, Kenya’s Cabinet Secretary for the Environment. “We didn’t just come here to commemorate, but to build forward and better, based on the steps taken since 1972.”

“We came to Stockholm 50 years after the UN Conference on the Human Environment knowing that something must change. Knowing that if we do not change, the triple planetary crisis of climate change, nature and biodiversity loss, and pollution and waste will only accelerate,” said Inger Andersen, Secretary-General of Stockholm+50 and Executive Director of the UN Environment Programme.

“Now we must take forward this energy, this commitment to action to shape our world,” she added.