Succession 'injustice' that has left man homeless for 47 years 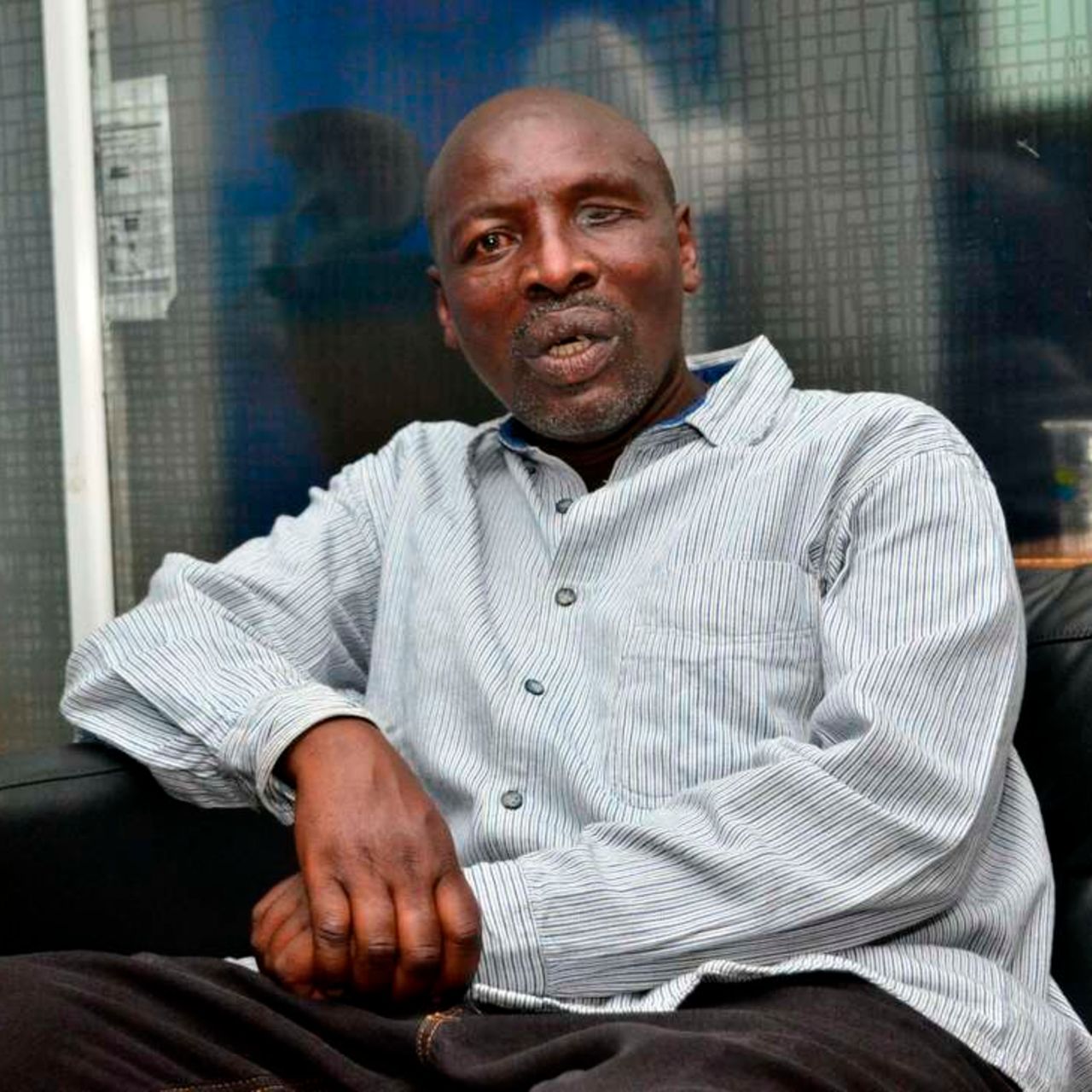 For Michael Maina Muiru, 61, the only memory worse than when his left eye was gouged out by gangsters in the dark of the night, is going back to his mother’s house to find the family’s belongings piled up beside her grave. It is a scene that still brings tears to his eyes.

It never bothered Michael and his three siblings that their mother, Alice Wanjiku Muiru Macharia, was their father’s fourth wife. Their father never visited the elder wives, and made no mention of them either.

Their home stood on a piece of land in Dagoretti, Nairobi County, and on another piece of land, bought by their mother, were rental houses and a water point that brought in extra income. Their bliss was cut short in 1972, when Michael was just a year shy of being a teenager. Their mother died.

Two years later, on Boxing Day, their father, together with their lastborn brother, died in a car crash on the Nairobi-Kikuyu road. Michael was 14, his eldest brother, Francis Njuguna, 16, and their youngest sister, Susan Wangui, was 10.

When their mother died, she was buried on her land in Dagoretti, and his father was buried on land belonging to his eldest son in Ngong, Kajiado County.

“Immediately after my father’s demise, my half-brother, Edward Waithaka came to my parents’ matrimonial home and took away all my father’s documents and my sister, with the promise of putting her through school. My other half-brother, Eliud Njuguna, the eldest son of my father, and on whose land our father was buried, took me in with the promise that he would take me for a course in mechanics,” says Michael.

Days turned into weeks, then months, before Michael realised that he would not be attending school. Sad and confused, he went back to the only home he knew.

One day, while going back home after visiting a friend, he was ambushed by robbers, and lost his left eye in the scuffle. He was admitted to hospital.

“While I was in hospital, Eliud transferred the land on which my late parents’ home stood to himself. The other parcel, where my mother had set up rental houses, he shared among the three wives and my brother. I went back home and found everything in the house had been hauled out and set beside my mother’s grave. A small portion had been left for me, and my step-mothers had already started to set up rental houses,” says Michael.

Unknown to Michael and his siblings, their half-brother Eliud had filed a succession case at the District Magistrate’s court, and had been granted a certificate of succession.

“Eliud worked in Sheria House then, and during the court proceedings, we were never notified. I assume he used his position of power to acquire our land,” Michael says, noting that after the certificate of succession was granted, the three women sought the senior chief’s confirmation before sharing the land.

In a letter seen by the Nation, then-Dagoretti Senior Chief John K Wanyee, wrote to the City Treasurer, requesting him to accord the interested parties the assistance they needed to process their succession and ultimately inherit the land.

The senior chief states: “I hereby introduce to you Zipora Wanjiru, Wanjiru Gathoni and Wairigu alias Wairimu, all the wives of the deceased and Francis Njuguna Ndungu as trustee of his brother and sister, children of the fourth wife who is also deceased, and who are legally heirs of the above estate as per enclosed copy of the certificate of succession dated 26th September 1978, of which I would therefore request you to kindly attend them and do the needful.”

“The land on which my mother was buried was hers. She bought it herself, and I know this because my father said so at her funeral. If these other families had no land, it was not right to split my mother’s parcel that she bought with her own money. The matrimonial land that my father bought would have been enough,” says Michael.

“Eliud inherited our land and home illegally,” complains Michael. “He had his own share where his mother lived.”

Lawyer Stanley Kinyanjui, who represents Michael in court, explains that under Kikuyu customary law, upon the father’s death and the minors being orphans, their paternal uncles should have taken the children and raised them. This is regardless of whether they were full or step-brothers.

Michael explains that he never knew his father’s brothers. They never visited and he first saw them at his father’s funeral.

“At the time of their father’s death, the firstborn was only 16. Without having an adult vocal enough to fight for them, I am of the opinion that that is how Michael and his siblings came to find themselves in the unjust situation they are in,” says Kinyanjui.

“Under Kikuyu customary law, when a polygamous family man dies, the youngest wife is the one who usually inherits the land on which she and her husband lived before his death. Even when parents die and leave their children, it is usually the last-born son who inherits the parents’ house. In this case, my mother’s two parcels of land should have been left as they were until our eldest sibling became an adult and could legally administer the estate. Instead, upon my parents’ deaths, everything that was left for us was snatched,” laments Michael.

“We have never seen a written record of any meeting that was held when my mother’s land was divided,” says Michael.

“When the land was shared, no surveyor was hired. My step-mothers hired young men who descended on my mother’s land with nothing but tape measures to share her property. They ended up leaving me a 19 by 70-foot piece of land. My mother’s grave sits on the same piece, and every time I leave my house, I have to pass atop it. Traditionally, before people shared a parcel of land, the space occupied by a grave was not included. However, in my case, my mother’s grave was counted as part of my parcel,” he adds.

The step-mothers have since died. Michael’s firstborn brother, Francis also died. So did Eliud, who is now represented by his son in court.

Michael’s citation at the High Court, and on which he sought letters of administration for his father’s estate, was objected to by his opponents.

At the Family Division of the court, the judge dismissed his citation on the basis that the case had sufficiently been adjudicated upon by a Magistrate’s Court, and therefore they would not pursue the matter further.

“On 12th March 2020, we filed a notice of appeal to the ruling of the judge, but because we could not access the file that was opened at the district magistrate court, we face a challenge. The registry said the file was likely at the Supreme Court, and if not there, at the Kadhi’s Court, where we are informed they are usually shipped to when the archives are full. After various trips to those two stations, the file is yet to be found and we are yet to receive any communication from the registry,” says Kinyanjui.

“With the file unavailable, I cannot say for sure that there was no succession case, and I cannot confirm that there was any. In the ruling, the judge suggested a remedy – revocation of the succession certificate. But even if we were to apply, the current succession law does not allow that. For us, it is a legal issue whether it can be revoked or not,” adds the advocate.

“Also, the fact that we cannot access the file means I cannot confirm the basis on which the district magistrate stood during the issuance of the certificate of succession,” states Kinyanjui.

He is now seeking to have the file reconstructed.

“Once it is reconstructed, we can have a proper direction that should guide us based on the court’s record of what transpired. But the problem is that the only document we have is the certificate of succession. It takes an application for the file to be reconstructed. We have lodged the same and are waiting to be promoted for payments and subsequent processes. The old technique of physically presenting yourself to the registry and filing documents no longer works,” explains the advocate.

With these legal challenges, Michael’s case may take a while to be concluded.

“I have followed up on this case for most of my adult life,” cries Michael. “While attending these proceedings, there were days when the file was available, and then there were days when it could not be traced. The only thing I want is justice for my family. We did not deserve what was done to us, and if I can get back what is rightfully ours, my heart will be at peace,” he concludes.