Sun sets on top city lawyer after 35 years of practice 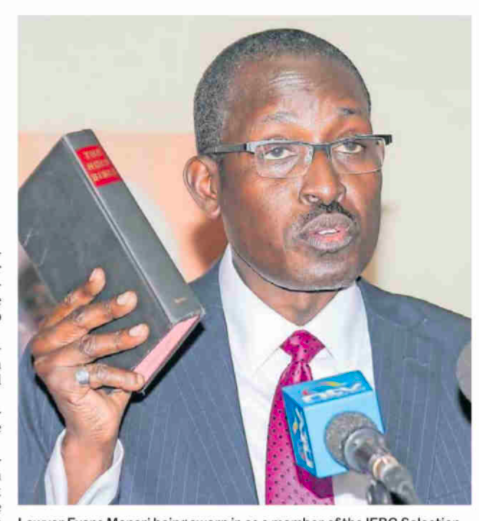 President Uhuru Kenyatta yesterday led the nation in mourning the death of lawyer Evans Monari who passed on in Nairobi after long illness.

In his message of comfort, Uhuru described him as a solid and dependable legal mind who leaves behind a rich legacy of professional success.

“It is regrettable that we’ve lost Evans to the cruel hand of death after a long illness. He was one of our country’s leading lawyers who distinguished himself as a dependable resource as seen from his successes,” the reflected. Monari was among Kenyan lawyers who fought a case against six accused persons from the country, among them Uhuru, at the International Criminal Court (ICC) in 2011 in the Netherlands.

He was the lead counsel for former Commissioner of Police Hussein Ali who was among the first accused to be discharged by the Hague-based court. Uhuru joined other leaders including Deputy President William Ruto, ODM leader Raila Odinga, Amani National Congress leader Musalia Mudavadi, lawyers and business people in condoling with the family of Monari. Alongside his stellar legal practice, the late Monari served in several public appointments among them the 2016 Independent Electoral and Boundaries Commission (IEBC) selection panel.

The Head of State wished the family of the deceased God’s comfort as they come to terms with his passing away. Ruto described Monari as a far-sighted visionary legal mind with supreme knowledge of the Constitution and the law.

“He was a gentleman, tireless and easy going. At this sad moment, our thoughts and prayers are with the Monarifamily, their loved ones and the legal profession. Rest In Peace, Evans,” said Ruto. Raila in his message described Counsel Monari a man with a brilliant mind, a generous heart and a lively spirit. He said he will be remembered him for his infectious laughter that masked the solemnity of the cases that he had to resolve in his illustrious legal career, on a daily basis. “It is with a heavy heart that I write this condolence message on behalf of my family to the family of Counsel Evans Monari. He has gone too soon, and our country is poorer with his departure,” he said.

Mudavadi in his message said: “ Rest in peace my good friend Evans Monari, you have fought a good fight. May the good Lord comfort your family at this trying moment.” Monari has spent the last couple of days in the Intensive Care Unit(ICU) accumulating a Bill of over Sh16 million. “Thank you for being my cousin brother. You forever leading by example, maintaining dignity, duty and decency, a combination of attributes rare to find in many people today,” said one Laban Chweya Machooka. Lawyers yesterday paid tribute to Monari, describing him as a man who played a big role in transforming the legal profession.