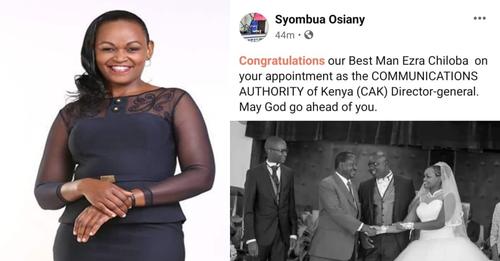 Media personality Syombua Osiany has taken down an initial post she had shared on Facebook congratulating Ezra Chiloba who was appointed as Communications Authority of Kenya director-general.

The gorgeous mother is married to David Osiany, who currently works as chief administrative secretary (CAS) in the Ministry of Industrialization, Trade and Enterprise Development.

This is what she had initially posted online:

“Congratulations to our best man Ezra Chiloba on your appointment as CAK Director-General. May God go ahead of you.”

However, based on the comments from the post, she deleted it after a majority of Kenyans called him out, accusing her of supporting impunity.

She is yet to make a follow-up comment based on that post even though she announced to the world that she and her hubby are close buddies with the former IEBC boss.

A day ago, Tuko reported a section of Kenyans expressed their disappointment following the appointment of Chiloba, former IEBC chief executive officer, as the CAK boss.

In a statement on Tuesday, September 28, the board chairperson Kembi Gitura said Chiloba would be at the helm for a renewable term of four years.

He will take over from Francis Wangusi, who was controversially hounded out of office during his second term in 2019.

“The appointment follows a competitive recruitment process to fill the position left vacant with the retirement of the former Director General, Francis Wangusi,” Gitura said in a statement seen by TUKO.co.ke.

Taking their sentiments to social media platforms, Kenyans said the integrity of the former CEO was questionable, adding it was absurd that he had gotten another government job.

“Do we expect change when our president keeps doing the same thing recycling the same people who led us the current crises?

“Ezra Chiloba, I still don’t understand how this man manages to get government appointments given his dealings while at IEBC, anyway, anything is possible in Kenya.”