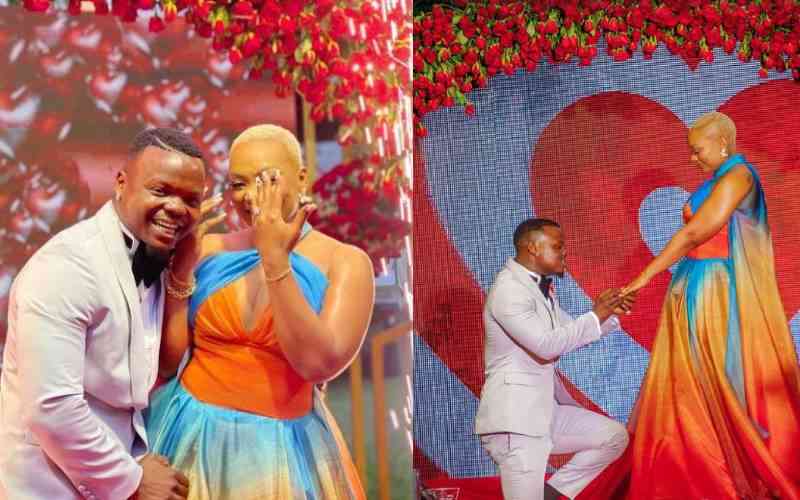 Harmonize, Tanzanian musician, has proposed to Fridah Kajala, his manager and lover.

Stunningly attired, Kajala revealed she was not flawless and that’s what made her forgive Rajab Abdul after a recent conflict. She accepted the musician’s proposal to marry her. “I’m nor perfect and have my weaknesses. I have forgiven him,” she said.

Their relationship experienced ups and downs, and at one point they even split up when he allegedly cheated on her.

Harmonize, also known as Konde Boy, would apologise to her and even tattoo an apology message on his body.

Harmonize first publicly apologized to Kajala in writing before erecting a billboard in Tanzania bearing the same message.

After his deeds first failed to impress her, he apparently bought her two costly cars. The actress later published a number of posts meant to respond while remaining unaffected.

“You can’t change everyone. just move on. Don’t let nobody play with you even if you love them,” she said.

But in May 2022, she finally decided to forgive him while opening out about her sentiments in a moving post.

In a social media post, she elaborated,“forgiveness isn’t saying what they did was ok, it’s just saying you won’t hold onto that negative energy any longer.”

There was forgiveness and a revived love days after the controversial singer was detained in Nairobi on suspicion of failing to appear at several entertainment venues despite getting payment for the performance.

READ ALSO  Bahati reveals why he has cancelled tours to the US twice this year
Related Topics:Fridah KajalaHarmonizeNewsProposal
Up Next