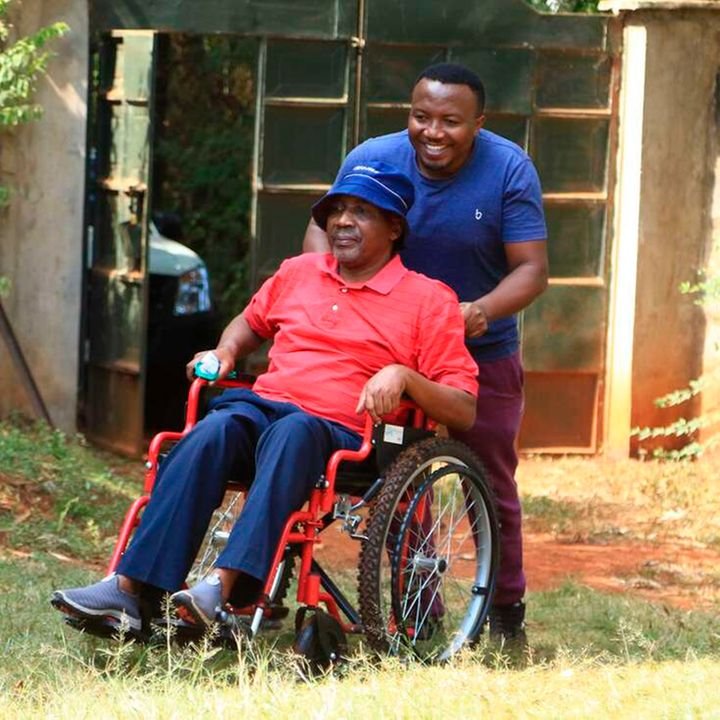 Joram Muthike bears surgical scars on the right side of his head. A teacher who has been through many storms, trials and tribulations, he has overcome many obstacles to success. Life has not been kind to him.

Mr Muthike has had to endure three surgeries to remove a brain tumor that has left him paralysed on one side for over a year.

Yet, as far as his life goes, the surgical scars are a sign of resilience, and his graduation with a master’s degree last week epitomises this. Throughout the year he has been in and out of hospital, he has remained hopeful, juggling between doctors’ premises and university halls.

Despite the challenges, he graduated with a master’s degree in education management, curriculum and policy studies from Kenyatta University on Friday.

“I’ve been one of the healthiest persons, even among my peers. This happened to me in June last year when suddenly I suffered a stroke,” Mr Muthike told the Nation at his home in Kirinyaga County, a day before KU’s 49th graduation ceremony.

Upon seeking medical attention, it was found that he had a swelling on his brain that needed to be removed before it could spread further.

“My first surgery was in July at Olive Centre in Nyeri, doctors said the swelling had some pus that needed to be removed,” he offered.

After the first surgery, Mr Muthike returned home walking and was on the road to recovery until the malignant tumor struck again in August. This necessitated a second surgery at Mathari Hospital to remove it.

Dr Andrew Nyaoncha, a neurologist, said Mr Muthike’s condition is known as glioblastoma multiforme, a grade four tumor according to the World Health Organisation (WHO).

“This is an aggressive tumor that has become common. We are seeing it among young patients. It’s the most common malignant tumor of the brain,” said Dr Nyaoncha.

A month after the second surgery, an MRI confirmed that he had a recurring tumor.

“When I came home to recover and still undergoing radiotherapy and chemotherapy, the growth was located again and had to be removed for a third time. I am now recovering,” said Mr Muthike.

Throughout the treatment, he had to undergo many sessions of counselling to nudge him to follow through doctors’ instructions and accept the follow-up surgeries.

With the paralysis, it was difficult for him to move around to undertake his school project and had to rely on friends.

“This ailment has affected my life in a big way because I cannot do things I used to enjoy doing. I cannot lift a jembe and tend to my crops, I can’t walk. It’s impossible to do things I love to do,” he said.

Mr Muthike has always been an educationist and has invested heavily on his studies and that of his children.

“I have always worked so hard to ensure that my children acquire the best education so they can become useful people for the community,” he said.

He graduated as a P1 teacher from Kamwenja Teachers Training College in Nyeri and began his career in a school in West Pokot. He later pursued his first degree at Laikipia University and started his master’s in August 2016.

Focus of his thesis

“I’ll not further my education from here. I am glad that I have come this far and I am grateful for my lecturers, who have been there for me throughout the years,” he said.

So passionate is his appeal for education that the focus of his thesis was the high number of boys dropping out of school in Kirinyaga County.

“Drug abuse, lack of school fees and peer pressure are the leading causes of mass drop-outs among boys in this county. I offered solutions that should be applied by policy makers,” he said.

Mr Muthike looks forward to authoring a book as he basks in the glory of triumphing against great adversities. “I am not going to the labour market anymore, neither will I start looking for employment. I have worked for 34 years and that is enough. I am going to let other people work,” he said.

His son, Dennis Macharia, said the father has inspired the family, whose journey aptly captures the proverb, ‘where there’s a will, there’s a way’.

“It’s been a challenging journey, both mentally and financially, but we are not looking at it as a sad story. It gives us hope and a lot of inspiration,” he said, adding that his father has undergone 30 sessions of radiotherapy and six cycles of chemotherapy in Nairobi.

Mr Macharia further notes that besides dealing with the recurring tumor, his father has had to deal with blood clots in between radiotherapy and chemotherapy.

“Having a sick parent is not one of the battles you wish to take on… we haven’t given up hope yet,” he said, adding that his father is a fighter and as a family, they are using his story to inspire other people.