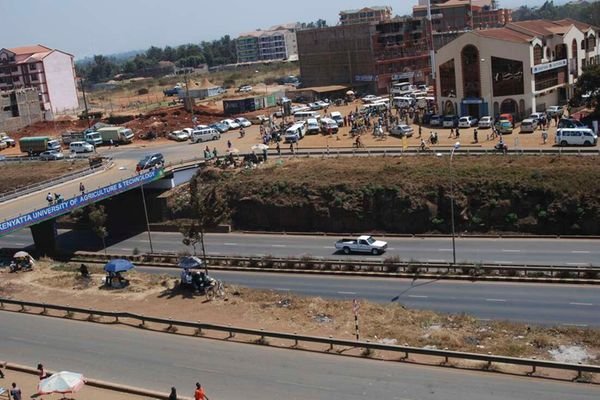 The need for rental houses to help ease the demand for housing in Juja, thanks to the Jomo Kenyatta University of Agriculture and Technology, has been constant, but the area has maintained a slow pace of development for decades.

With the start of the tarmacking of the Juja Town-Juja Farm road, many residents of Kalimoni Ward had hoped that access to the area would speed up development, but lingering insecurity is threatening to further keep the area deserted.

Their targets, according to residents, are land buyers seeking to seal deals with the multiple property investment groups that pitched camp in the area years ago, hoping to one day cash in on demand for the prime land when the road is finally tarmacked.

Some of the people who bought land in the area have been warned not to visit their property unaccompanied by the police. They were warned via texts seen by the Nation.

“It has come to our attention that there have been incidences of insecurity/robberies in the Juja area. The robbers are mainly on boda-boda and they are attacking people attending to their construction projects and or visiting their plots.

“We write to advise you to take precaution if in this area and we recommend that if you intend to visit your property, please seek support from the security agents, especially the police station nearby,” says a warning text sent by one of the property developers.

The robbers wait for visitors to alight from their vehicles before striking. They demand money and other valuables, said a victim of the gangs.

“They come riding in twos and pretend to be going about their business before turn and demanding money. They brandish a pistol. At that point, many are forced to surrender all they have,” the victim, who requested anonymity, told the Nation.

The gangs also target supervisors at church constructions and those making payments to their construction crews.

“On some occasions, victims have been robbed after withdrawing workers’ pay from M-Pesa shops at Salama and Juja Farm shopping centres. We wonder whether it is the M-Pesa agents or the workers, who are working with the gangs,” an elder told the Nation.

While some incidents appear isolated, the fact that they are recurring and happening in the same style is a matter of concern.

“Some will pretend to be asking for manual jobs at 1pm, when all duties have been allocated, a scheme they use to disarm their victims before demanding cash at gunpoint,” said the victim.

However, local police said they were not aware of the attacks and no one had requested escort to their property.

Juja Sub County Police Commander Dorothy Migarusha, however, told the Nation that muggings were rampant in 2019.

“If there are new cases, then the victims have erred in not reporting them to us. We act on data and if an attack happens to you and you fail to report, how then do we assist you? Let us also be careful, this could also be a new trick deployed by some developers to kick competition out of business now that the tarmac is coming up,” she said.

“No individual has come to us to request security while visiting their plots. The only security we have provided has been to groups holding their annual general meetings and those surveying their plots because misunderstandings may arise over boundaries,” added the police commander.

Residents attribute the rise in thuggery to increased economic strain during the Covid-19 lockdowns, which has seen gangsters grow bolder. Others attribute it to an increase in primary school drop outs in the area and drug abuse by young people.

In July last year, 50 residents appended their signatures to a letter sent to the Ministry of Interior complaining about the local chief’s “laxity” and “detachment” about the security woes in the area.

They wanted disciplinary proceedings commenced against area chief Sarah Waigwe and an interim replacement installed pending the outcome of her case. However, no action has been taken since.

The complaint came after constant house breakings and robberies. Late last year, the attacks escalated, with several homes broken into and women raped.

“Our complaints, however, led to the transfer of the previous team of officers attached to Juja Farm Police post. We got a new OCS (Officer Commanding Station) and a National Police Service Land Rover, but we hardly see it around. There has been some improvement since the new OCS came in, but a challenge remains in terms of police mobility,” said an elder.

“The vehicle is still very much with us. Today you may find it in Witeithie and tomorrow in Juja Farm because it’s not meant to be stationary. It’s meant to assist officers’ mobility while responding to situations,” said Ms Migarusha.

KCSE2020: History made as small known school takes half of the class to university