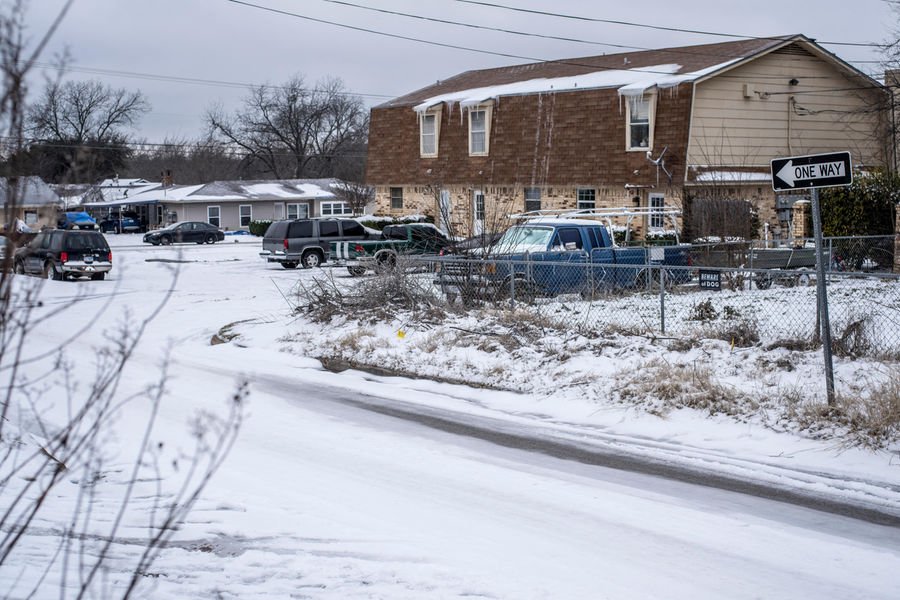 Millions of people were still without power on Wednesday in Texas, the oil and gas capital of the United States, with some facing water shortages as an unusual winter storm pummelled the southeastern part of the country.

The National Weather Service (NWS) issued a winter storm warning for a swathe of the country ranging from east Texas to the East Coast state of Maryland.

The NWS said the storm would bring ice, sleet and heavy snow to parts of Texas, Louisiana, Arkansas and Mississippi as it tracks to the northeast, causing power outages, tree damage and making driving hazardous.

Even though the Arctic air mass was beginning to lose its grip on an area of the country not used to such extreme cold, the frigid temperatures would continue, the NWS said.

“The Arctic air will also continue over the Plains and Mississippi Valley with temperatures of 25 to 40 degrees below average,” the NWS reported Wednesday afternoon.

US President Joe Biden was forced to push a visit to the Pfizer Covid-19 vaccine manufacturing site in Kalamazoo, Michigan to Friday due to the inclement weather.

More than 30 storm-related deaths have been reported by media in the United States since the cold weather arrived last week, many in traffic accidents.

Hundreds of thousands of residents of the Texas metropolis of Houston are suffering from both power outages and a loss of water pressure.

READ ALSO  SAD: Kenyan man - a US Navy Veteran - who was reported missing in 2020 found dead in Richmond, VA

Several Texas cities advised residents to boil their water before drinking it or using it for cooking.

David Hernandez, 38, spent the night at a Houston church with other people who have fled their homes.

“My car got stranded and I was trying to sleep in the car but it was just too cold,” Hernandez said. “Liquids in my car were actually turning to ice so it was like sleeping in an ice box.

Power companies in Texas have implemented rolling blackouts to avoid grids being overloaded as residents crank up the heat.

According to PowerOutage.US, about 2.4 million customers were still without power by Wednesday evening in Texas, the only one of the US’s 48 continental states to have its own independent power grid.

Beto O’Rourke, a former Democratic presidential candidate from Texas, told MSNBC television the situation in the Lone Star State was “worse than you are hearing.”

“So much of this was avoidable,” O’Rourke added.

“The energy capital of North America cannot provide the energy needed to warm and power people’s homes in this great state. We are nearing a failed state in Texas.”

Austin Energy, the local power company in the capital city of 950,000, said tens of thousands of area customers were without electricity, but that they were able to start restoring power in some spots.

“However, this power will NOT stay on indefinitely due to anticipated grid conditions continuing,” the company’s Twitter account said Wednesday afternoon, warning of future rotating outages.

The energy company published the locations of “warming centres” set up in local schools.

While electricity companies struggle to get power restored, Austin-Bergstrom International Airport resumed flights on Wednesday after a two-day hiatus caused by heavy snowfall.

“There’s certain parts of the country, Texas being one of them, where vaccination sites are understandably closed,” Zients said.

“What we’re encouraging governors and other partners to do is to extend hours once they’re able to reopen.”

Many weather-related deaths so far have resulted from traffic accidents, but Houston police said a woman and a girl died from carbon monoxide poisoning after sitting in a car in a garage with the engine running to keep warm.

And emergency medical authorities around the state said dozens of others have been treated for suspected carbon monoxide poisoning, while 77 were treated for hypothermia in northern Texas Tuesday.

A man in Louisiana died when he hit his head after slipping on ice, and a 10-year-old Tennessee boy perished after he and his six-year-old sister fell through the ice into a pond Sunday.

A dozen animals — including one 58-year-old female chimpanzee — died during the freeze at rescue sanctuary Primarily Primates near San Antonio, the organization said on its website Wednesday.

The winter storm spawned at least four tornadoes, according to Atlanta-based weather.com, including one in North Carolina on Monday that killed at least three people and injured 10.

Related Topics:David HernandezPlains and Mississippi Valley
Up Next

EXPLAINED: Here is Biden’s immigration plan which could get many a path to citizenship